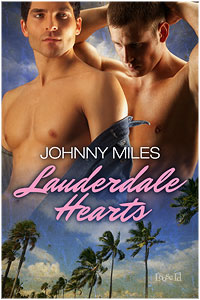 Description:
Blake Hudson has everything. The perfect job, a penthouse apartment, and killer abs. But when he suffers a heart attack at 39, he realizes something is missing from his life and wonders if being career-oriented was just another way of saying workaholic.
When his doctor suggests he take time off from work, Blake puts it off. He's got too much work as a new partner in New York City's hottest advertising agency and he's about to land a multi-million dollar account. But his employer pulls rank and surprises him with the keys to his own house in Fort Lauderdale, the Venice of America.
With Ricky Sanchez, a smoldering Latin hunk, Blake discovers there truly is more to life than working 24/7 and making money. There are places to visit, things to do, and steamy sex to be had anywhere their imagination will let them. But all vacations must come to an end. What will Blake choose when the agency calls him back to babysit his coveted multi-million dollar account?

Prior to today, I had never read a romance written by a man.  If you are of the “men can’t possibly write a good romance” school of thought, I suggest that you stop whatever you’re doing right now and read Lauderdale Hearts by Johnny Miles.
This is a story of redemption, of soul-searching, of living in the moment, and of falling in love.  Blake is your stereotypical New York businessman.  He eats, sleeps, and breathes his advertising job.  There isn’t room in his life for anything else, nor does he especially want there to be.  Until he has a heart attack.  His bosses, realizing that Blake will never take the time he needs to recover, force him to go to Fort Lauderdale for a month so that he will actually relax.
Enter Ricky, the very young, very attractive, Latino masseur.  Ricky and Blake meet when Ricky comes to the house where Blake is staying to give Blake’s boss a massage.  As they are introduced, the instant attraction between the two men is undeniable.  Unless, of course, you’re Blake and you try to shut everything but work out of your life.
At any rate, Ricky and Blake end up going out a couple of times, and things really heat up.  Once Blake gets the OK from his doctor to have sex, it is on.  In every situation or setting you could possibly imagine.  But it’s not over the top.  Honestly, it’s just what you would expect at the beginning of any new relationship.  It’s the lust phase, and I, for one, enjoy it.
Blake and Ricky are both a little bit broken, and I love that both of the heroes of the story are imperfect.    Fortunately, they’ve both been hurt in the same way before, and I think that really helped draw them to each other and make them more compatible.  I also loved that despite being 15 years younger than Blake, Ricky is the one leading the way.  Ricky is very complex to me, in that he seems so young and vulnerable at points, but at other times he’s clearly wise beyond his years.  I’m thinking in particular of a scene where Ricky and Blake go to a Greek restaurant.
“The only thing that matters,” Ricky said over lunch at Taverna Opa, “is right now.  This very moment.  I mean, it’s all we have!  It’s all any of us have.”
What follows is Blake’s realization that he really does need to slow down and live in the moment.  Maybe it was the setting of the Greek restaurant, but the entire exchange reminded me so forcefully of my favorite book in the entire world, Zorba the Greek.  In case you’re unfamiliar with Zorba, the message is the same –don’t dwell on the past or the future, but live in the moment instead.  In Zorba, this is best demonstrated by a green stone; in Lauderdale Hearts, it was demonstrated by a simple dance.
As with all romance, there is a huge conflict that must be resolved before the happily ever after can happen.  This one actually made me cry.  But the way that it was resolved was even better.  It may have been a little sappy, but it was just so well done.  This was a beautifully written story about lust and love and redemption.  If Mr. Miles’s other works are half this good, I’ll be running out to buy them all.
Laura's Rating: