Review: The End of Night 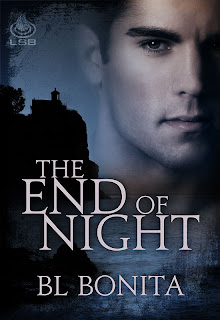 Liv Erichsen is destined to become a spinster. After the body of her second fiancé is discovered on the jagged rocks below her cliff-dwelling estate, she's labeled The Black Bride. No man would dare fall in love with her again and risk being her next victim until a mysterious and arousing gentleman arrives at her door.

A liar and a womanizer, Mason Davidson's reasons for being at Valhalla Estate are not to redeem himself. Then again, he's never met a woman quite like Liv before. She's strong, passionate, and fit to drive him crazy with lust. But how can he make her accept him for more than a casual fling when he arrived for the wrong reasons and a crazed killer is watching?
Laura’s Review:
A quick read, a “cursed” bride-to-be, a dashing hero raised on the streets, and an imposing Norseman for a father (who I really pictured as a cross between Sig Hansen from Deadliest Catch and Alexander Skarsgård).  What’s not to love?
The End of Night features all of these elements.  Everyone around Liv thinks that she is destined to be a spinster since she has had two fiancés, both of whom were killed the week before they were due to marry her.  She’s not really thrilled with her life, but she loves all the people on her family’s isolated Minnesota estate.  And while she loves her father, Olen (or, as I like to call him “Sig Skarsgård”), she is not too fond of his new wife Amelia.  Nor is Liv particularly happy when Amelia’s “son” Mason arrives at the estate.
Obviously Mason isn’t really Amelia’s son, a fact that is quickly revealed when the ever sassy Liv sneaks into his room and searches it.  Mason happens to find her, she calls him out on his lies, and then they kiss and make up.  And they keep kissing and making up.  It turns out that Amelia and Mason are old friends, and she had asked him to come to the estate to investigate the supposed curse.  No one counted on Mason and Liv actually falling for each other.
Like I said, this was a super quick read.  I’m a sucker for cursed heroines with overbearing guardians (and really, Olen is fabulous.  He doesn’t say much, but you learn so much about his character through the observations of the other characters), so I was destined to like this story.  Plus the hero is slightly unconventional and the heroine is spirited, sassy, and intelligent.  There also happens to be a great twist at the very end, which makes this book much less predictable than I had originally thought it to be.
Laura's Rating: