Review: Taken To The Limit 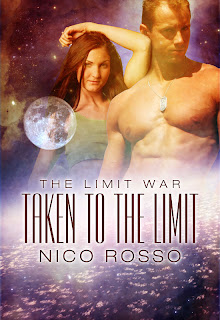 Description:
“Welcome to the Limit War.” E.R. Doctor Korina Antonakis thinks she has mastered the chaos of her work and life. In a flash of light, everything changes. A man appears, a soldier from another world. Sergeant Morrow  is a Nightfighter, an elite soldier who always battles alone. But he  needs an ally on Earth, a doctor. In the dark of night, he opens  Korina's eyes to The Limit War. And Earth is on the front lines. More  amazing than the interstellar war, is the soldier before her. He is  strong and stoic, a veteran, but beneath the armor, Korina finds the  heart of a man. And in Korina, Sergeant Morrow finds the soul of a  warrior to match his own. Their lives had started light-years apart, but  the attraction between them pulls like destiny. Their desire is real,  but the enemy needs to be driven from Earth. Can Korina and Sergeant Morrow's passion survive in the Limit War?
Ben’s Review:

Korina Antonakis thrives on the fast paced life of an E.R. doctor, but even that isn't fully satisfying. She wants more, but she doesn't know what until Sergeant Morrow, an elite Nightfighter in the Limit War, appears out of nowhere carrying an almost-dead comrade.  Even in the midst of the fierce battle which breaks out between the two Nightfighters and the invading Dusk Warriors, Korina can't resist the magnetism of those brilliant blue eyes.  While Korina struggles to stay alive and make sense of her shaken world, Sergeant Morrow is shaken in return by the bravery and beauty of this native Earthling. As they escape out into the hostile battleground that most on Earth cannot see, the passion between them becomes more inevitable, if only they can survive to enjoy it.  And trust me, when they get the chance, they enjoy it mightily.


Whether you are a stalwart science fiction addict or a rabid romance fanatic, you will not be able to put down your eBook reader.  At sixty-eight pages, this is a quick read, but don't even think of starting it when you don't have time to finish it. You'll let the dinner burn, the kids rot in front of the TV, the boss send angry messages, but you'll have to keep reading.


My only quibble with TAKEN TO THE LIMIT is that I wish the author had kept the erotica toned down a little more so I could recommend the book to science fiction readers who might be squeamish about the sexual antics, both on Earth and in space.  On the other hand, I think you'll hear few complaints from the legions of fans who like their romance smoking hot.  In that regard, I have to put in a word of praise for the cover artist, April Martinez.  Yowza!


If you like your women smart and sexy, and your men both protective and heroic, you should buy the book. Yes, right now.  That's what eBooks are for, after all.  Best of all, it appears there will be more books set in The Limit War universe.  I, for one, will be eagerly awaiting them.
Ben's Rating: