Author submission in exchange for an honest review.
Title:
The Cruiserweight 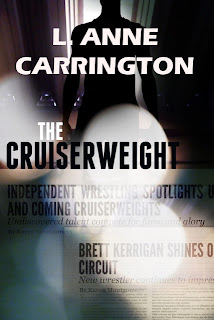 Description:
In this punchy, romantic take on the wrestling world where only some of the physical contact takes place in the ring, sports journalist Karen Montgomery has been following for years the career of Brett Kerrigan, one of the smallest cruiserweight wrestlers in the business, and can recall in detail every bout he has ever fought, recognizing his outstanding skills as a wrestler and his intuitive flair for entertaining the crowd.

She has even written an award-winning article about him. Now she desperately wants to meet him. One night, after many failed attempts to reach him, she looks up to find him standing right there in front of her. They get talking and they immediately hit it off.

However, as they become involved and grow ever-closer, Brett loses his contract and must strike out on his own. Will their relationship survive the pressures on both of them, their differences in ages, and the other women in Brett’s life?

Or will one of them decide they are not the ideal tag-team after all?

L. Anne Carrington has created a book which doesn't fit well into standard categories.  Part romance, part action, and a whole lot of wrestling, the story is told from the perspective of Brett Kerrigan, a rough-and-tumble cruiserweight wrestler whose main job, it seems, is to get beaten up by bigger stars.  Brett catches the eye of Karen Montgomery, a sport reporter who sees something special in the tough guy. This is clearly a world Carrington knows well, and she brings in a wealth of details which will surely fascinate wrestling fans. I'm not a wrestling fan, but I imagine that true fans would enjoy the gritty action.  The problem I have with The Cruiserweight is not the wrestling, but the stilted treatment of the characters.  We are repeatedly told that Brett is not like the other wrestlers, even in the midst of yet another sex scene with yet another willing and compliant woman.  He cares, we are told, even as he succumbs to the oral expertise of yet another buxom and panting fan. There is nothing wrong with a good sex scene or two or three, but none of the sex scenes are particularly good.  It felt at times as if Carrington was eager to keep the attention of her male readers with scenes that were overly explicit and far from romantic.
Once Brett and Karen are actually dating, the author settles down and lets them behave more naturally toward each other, so the books ends on a better note that it starts. The ending is satisfying, if not incredibly surprising.  All in all, this is a book more suited to wrestling fans than romance fans.
Ben's Rating: