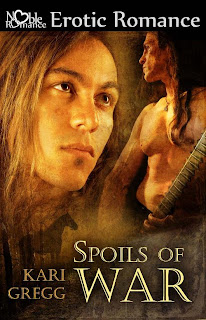 Description:
Enslaved during the invasion of the rival King of Herra, Micah cut off his emotions and adapted to his new life in servitude. Xerxes, the Herran King, abuses his captive to keep the neighboring kingdom of Alekia under his yoke, but after Micah nearly dies when plague sweeps Herra, the Alekian King sends Eli to bring his beloved son home. Institutionalized by his slavery, unable to cope with his freedom, Micah seeks to please the new master he's found in Eli throughout their harrowing journey to a homeland he no longer remembers. Eli protects the young man and introduces Micah to the pleasures denied him as a prisoner. Will Micah accept his noble birthright when they reach Alekia, and more importantly, can he accept Eli as the devoted slave his father has given him rather than the master he's come to love?
Laura’s Review:

After reading the blurb about this book, I was a little skeptical – it was definitely something that was a little out of my comfort zone.  At the same time, it seemed to build up a great story, so I stepped out my happy little box and gave this one a read.
I actually read Spoils of War twice, just to make sure I didn’t miss something.  I didn’t.  I think this book would have been better suited to be a full-blown novel, rather than a novella.  There was so much potential for a great plot to be developed, but it never quite got to that point for me.
I loved that the story was told in the first person.  It allowed me to empathize with Micah, the main character.  As a slave in the kingdom of Herra, Micah is both a kitchen slave and essentially the palace whore.  He is at the nightly beck and call of his assorted “masters,” and this greatly shapes the events and relationships that unfold later in the story.
Once Micah is rescued from Herra by Eli, the story starts to move along a little more quickly.  Micah assumes that he is meant to serve Eli, when in reality, it is the other way around.  Eli teaches Micah all about the pleasures that he had been forbidden before.  The sex in this book is all kinds of hot and sweaty and fantastic.  I’d like to say that I’d like to see more of it, but it basically consumed the second half of the novella.  And it never stopped being well written and just graphic enough.  Micah, though still unsure about his new role, revels in the pleasure he receives from Eli.
Despite all of this, Micah never quite manages to come out of his shell.  He’s had an exceptionally hard life  - beaten because he was a slave, and raped nightly because he reminded the Herrans of a woman.  Realistically, Micah needs years and years of therapy before he’ll be comfortable around other people, but, as quickly as the rest of this story moves, I really felt like Micah could have healed a little faster.
There is one thing that you should be aware of if you choose to read this book: There’s rape.  Mostly it’s just alluded to, as a way to make the reader aware of what exactly shapes Micah’s background.  There is one scene that gets a little bit more graphic, but not over the top.  It certainly didn’t make me uncomfortable, if anything, it made me feel more deeply for Micah.
Overall, I was kind of indifferent towards this story.  I think that so much more could have been done with it – the characters could have developed a little more, and there could have been a little more of an informational back story.  Since it’s told in first person, it’s really easy to see the world through Micah’s eyes in the beginning, but that kind of dies off once Eli comes into the picture.  I still felt like I was in Micah’s head, but as a reader, it would have helped to have some insight into what the other characters were thinking too.  At the end, everything gets wrapped up very neatly in a nice, happy, sex-filled package (pun intended).
Laura's Rating: