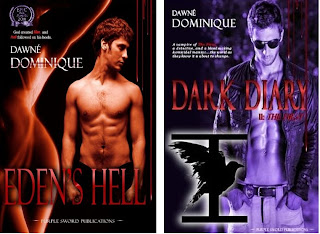 Description:
Eden's Hell:
In the beginning…

God created man and called him Adam, a fine specimen replicated in his own image. He then created woman to ease Adam’s loneliness and named her Lillith. Unfortunately, God realized his mistake too late in giving woman free will, for she would rule her domain—not man.

When Lillith left Adam, God created another for his first-born son, and gave her the name Eve and a kingdom called Eden, but by then it was too late, for he’d unleashed Hell into the world of man.
Dark Diary:
The lives of a deranged serial killer, a seven centuries First vampire and a City of Winnipeg police detective collide in this second novel of Dawné Dominique’s The First series.
Daniella Rolfe, a seven-century old First vampire is unwittingly drawn together with a City of Winnipeg police detective, who happens to be investigating a string of some rather bizarre serial murders. It doesn’t take long for her to discover that this mere mortal man holds more power over her than any she's ever known.

And Aiden…he's only dreamed about women like Daniella.
Blood battles and broken vows are just the beginning of Daniella Rolfe’s woes.
Brandi's Review:


My opinion two chapters into Eden's Hell was WOW! I loved this book! It was a fresh twist on an old story, and was beautifully written. The story is actually about a dark and lonely Addison and his psychotic and malicious ex wife Satrina who are vampires living in California. Enter innocent Eva, a mere mortal escaped from Satrina's grasp before stumbling onto Addison's beach, literally. Then all hell  breaks lose in the power play to retrieve what Satrina believes is her "pet".  The ending has a twist that I know I didn't see coming, but we finally see a happy ending to a beautiful love story full of angst, fear, a little bit of faith and a whole lot of sacrifice. It also sets up the next book beautifully.  My only compliant is that the synopsis for this book does not sound as appealing as the book actually is. In Dark Diary, we find a rough around the edges yet irresistible cop, Aiden, who crosses paths with an anomaly amongst the vampires creed, the beautiful Daniella. Both feel the sparks in their first meeting and, while trying to sort through these feelings, a serial killer is leaving a wake of bodies all with a message for Daniella. But when the most recent body has a message for Aiden, they realize they must work together and give trust unexpectedly in order to stop the murders. When grief pulls our couple together, sheets ignite!   While this book was more sexually charged then the previous, the love was no less special.  Again beautifully written, and I love the fact that again we receive a happy ever after of sorts, but in a very convoluted way. I am super excited for the next in the series!!
Brandi's Rating:
Eden's Hell: