Review: A Taste Of Terror 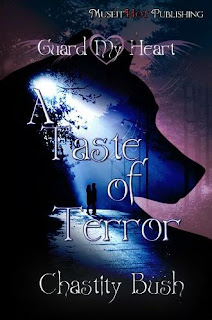 Description:
When Cole Douglas is sent in search of a rogue werewolf, he thinks the mission will go off without a hitch as so many before.  As a Guardian, it is Cole’s job to protect all living beings, mortal and immortal alike. But when sexy nurse/newly turned werewolf Chloe Dunn attacks him, his new mission take a surprising turn as he learns that not only is she beautiful, she is his mate.
Refusing to acknowledge his destiny, Cole continues with his intended mission, only to find that the beautiful creature that attacked him is not only his one true mate but his ticket to finding the rogue werewolf he has been assigned to kill.
Despite the danger lurking all around them, Cole finds himself drawn to the Chloe unlike any woman before. From her golden brown hair to her amber eyes, Cole realizes that even though he doesn’t think he is ready for a mate, just a look from her can set his blood on fire.
Chloe Dunn is just learning to live life as a werewolf when the scent of a stranger sends her into a frenzy and leads her to attack him. Cole is dangerous and wild, something she needs no part of but the overwhelming pull he has on her is more than she can bear. The more time she spends with him, the more she wants him, needs him and will do whatever it takes to have him, even if it means placing herself in the hands of the very rogue that turned her.

I am going to split my review in half for this book. I loved the hero and heroine in this book. Cole was strong, sexy and best of all, sensitive! Those three "S" words get me every time. Chloe was sassy, smart and real. There was love, loss and action in this story.  I thought the story was great, loved the plot and really loved the ending. And I even hope there is a sequel for Meecham.  Overall I enjoyed it.
However, it lacked what you would call creative editing.  There were times when things were choppy and should have been smoothed out. Other times there were parts that went from here to there and no details on how it got there. But my biggest complaint is the lack of adjectives. At one point the same phrase was used repeatedly within a chapter.
Sadly these errors really held the book back from being awesome for me. I don't blame the author for something that should have been worked on in editing. But if you can overlook them, then it's worth the time.
Brandi's Rating: