Review: Passion under the Poplars 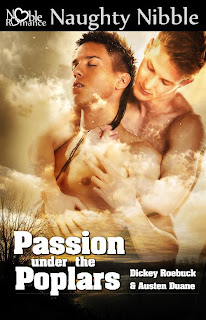 Description:
Heartbroken because his boyfriend dumped him for their Brazilian hairdresser, defeated because he got fired due to the recession, and desperate because his savings melted far sooner than he expected, Farley Stevens has no other option but to leave San Francisco and return to his Bible Belt hometown. The future seems bleak.
But then he accidentally meets his unrequited first love—a former quarterback who never acknowledged his existence back in high school. Can anything in his life remain the same after this chance reunion?
Joey's Review:
I should preface my first review by admitting a couple things. I’ve never been a big erotica reader. Not for any prudish reasons, just my own nonsensical nitpicky ways at work. And the story I’m about to review? My first all-out m/m erotica read. Ever. Needless to say, I had no idea what I was in for.
Passion under the Poplars is a Noble Romance story, from their Naughty Nibbles collection. This is a short, to the point erotica read, detailing a quick journey from a chance meeting between Farley and Brock, former high school-mates, to the bedroom. Farley had quite the crush on Brock, the all-star jock, when they were younger. Farley’s sexual orientation was known, and he was clearly the school outcast. Brock was the Everybody’s All-American quarterback-who-dates-the-head-cheerleader type. Which sets up just why Farley and Brock’s worlds never collided until much later.
Like I said, this is a short read. 22 pages. And I really enjoyed the story! The premise of their prior classmates status is perfect for this Nibble of a story. No need to create a complex history, because regardless of our orientation, we all have someone in our past we used to love or lust after from afar and we can relate.
These two are going to get together, that is clear from the first page. And the given logic about why this can happen now is perfectly sound.
I have no complaints about this read. From the story structure standpoint, I found the prose well-written, fluid, and natural. The erotic aspects were handled very well, and the way it was written feels like a good middle ground that male readers and female readers will both appreciate. Not too flowery, but not too rough and tumble. I’m one who easily cringes at cliché descriptions of the deed, and I didn’t cringe once.  I found myself grinning as Farley fought his internal lust battle upon meeting up with Brock for the first time in years, and I felt that a believable chemistry was struck between our heroes in such a short amount of space.
I honestly would have liked to continue to read and learn more about Brock and Farley, if this were a full-length novel. The authors immediately caught my interest and made me like these guys in such a short amount of time. If you’re a fan of m/m erotica stories and want to kick back for an hour and have a smooth, quick read, I think this will satisfy you.
Joey's Rating: