Review: A Taste of Seduction 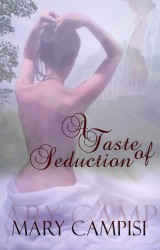 Description:
A young woman of noble blood, raised as a peasant girl...
An orphaned stable boy, now grown and the surrogate son of a powerful earl – the same earl who just so happens to be the young woman’s father...
Meriel and Anthony have nothing in common--she runs barefoot and talks to animals, he won’t loosen his cravat unless the bedroom door is firmly closed. Meriel believes in love, hope, and happily ever after. Anthony believes in keeping a safe distance from anything resembling an emotion. They have nothing in common but an undeniable, burning desire for one another they can’t ignore or understand, and an ailing "father" who will do anything to see them together. Unfortunately, there are others, cunning and manipulative, working behind the scenes. Others who will stop at nothing, willing even to kill, to keep them apart.
Brandi’s Review:
Anthony,oh Anthony.  I wanted to smack him at first.  But then he quickly made me feel guilty about feeling that way.  Such a big strong brute, who is really just a lonely, vulnerable little boy underneath it all.  And if you read romance, then you're a sucker for a man like this.  By the end of the book, he was most definitely sigh worthy.
And I just adored Meriel.  She was such a joy from beginning to end.  This character stayed true to herself and her beliefs from beginning to end, and while things weren't always peaches and cream for her, she never lost her sweet love and innocence.
Awesome read and great job by Mary Campisi.
Brandi's Rating: