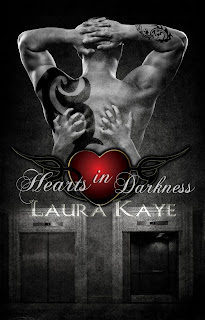 Description:
Makenna James thinks her day can't get any worse, until she finds herself stuck in a pitch-black elevator with a complete stranger. Distracted by a phone call and juggling too much stuff, the pin-striped accountant caught only a glimpse of a dragon tattoo on his hand before the lights went out.

Caden Grayson is amused when a redhead literally falls at his feet. His amusement turns to panic when the power fails. Despite his piercings, tats, and vicious scar, he's terrified of the dark and confined spaces. Now, he's trapped in his own worst nightmare.

To fight fear, they must both reach out and open up. With no preconceived notions based on looks to hold them back, they discover just how much they have in common. In the warming darkness, attraction grows and sparks fly, but will they feel the same when the lights come back on?
Deniz’s Review:
Who hasn’t wondered what might happen if they were stuck in an elevator with an attractive stranger?That’s exactly what happens to Makenna and Caden, and their budding relationship veers on the edge of erotic.The trouble is that Makenna and Caden are a little too well-drawn. The point of view jumps from one to the other (some white space to mark each shift would be easier on the eye), and every nuance of their thoughts, worries, feelings and resolutions is spelled out. As is every single step of their actions from the first brush of hands to the final moments. And afterwards. A little more trust in the reader to fill in the gaps, and a little more mystery overall would have made this story really sizzle.That said, the connection between the two is undeniable, and their conversations in the first half, as they gradually get to know one another, moves alone at a good pace. On the other hand, it’s bothersome when swear words suddenly creep into lovemaking when neither character has used those words before. And moving from nuanced description to sudden uses of the words torso or labia pull the reader right out of the story.In the end though, when those elevator lights come on, the reader’s just as disappointed as Makenna and Caden are. Not to give away the ending, but it’s a good thing there’s a world outside the elevator...
Deniz's Rating: