Review: Sleeping with the Frenemy

Author submission in exchange for an honest review.
Title:
Sleeping with the Frenemy 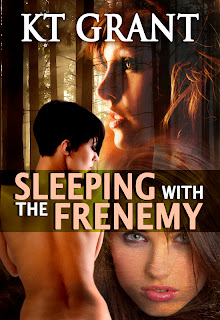 Description:
Deborah Murnay has a life most women would die for. She has a loving wife of four years who gives her anything she wants. But Deborah hides a dark secret. Her wife, Genevieve, not only enjoys kinky, dangerous sex, but is insanely jealous and possessive. When a violent argument between the two leaves Deborah bruised and battered, she has no other choice but to run away.


Through some intricate planning on Deborah's part, she's able to trick Genevieve into thinking she's dead. Deborah becomes Sharon Wade and ends up hundreds of miles away in the small town of Woodberry Creek, where she can start over again, even though she lives in fear that Genevieve will find her and kill her.


When grade school teacher Bridgette Woodberry notices her new neighbor, she quickly figures out Woodberry Creek's new resident is hiding something. Deborah knows she can't have a future with Bridgette, but finds herself attractive to the kindhearted redhead whose kisses and warm embrace makes her feel protected.
As Deborah turns to Bridgette to help heal her scars, Genevieve is waiting for the right moment to take back her wife and make her pay for deceiving her...


Joey's Review:
Hey, another first for me: a romance with lesbian leads. Sleeping with the Frenemy is a retelling of the classic theme of an abused wife leaving her abuser and starting a new life in a dramatic fashion. Think Julia Roberts flicks.


Deborah is the wife of Gen, a domineering and downright twisted lady. After having taken enough beating and sexual humiliations at the hands of her wife, Deborah runs away, faking her own death and disappearing into a new life and new identity in Woodberry Creek.


Familiar plot, yes, but you know what they say: there are no new stories, only new ways to tell them. It was interesting to see the story from the solely female angle. Gen is ruthless and incredibly unlikeable, and proves that cruelty knows no gender. Deborah is passive and timid, but takes a huge step forward in her own personal evolution by leaving her wife for good. She is rightfully scarred, emotionally and physically, and has trouble opening up to a new (potential) love interest in Woodberry Creek resident, Bridgette.


The controlling sex scenes with Gen can be downright disturbing, but they fit the character. The love scenes didn’t do much for me, but I’m too interested in the Y chromosome set, so don’t hold it against the author. If you’re a fan of lesbian erotica, Deborah and Bridgette’s scenes will work for you.


I like Deborah and Bridgette as characters, and think this was an interesting twist on a familiar story.