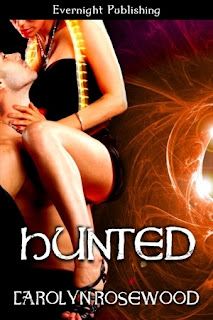 Description:
For the past four hundred years, Jahi Wickes has made forged documents and credit cards for the female demons who seduce men into signing away their souls. While enjoying the parades at Mardi Gras, she's ambushed by two angels. One is her former guardian angel, and the other is the Nephilim who’s tracking him.
Dagon has been chasing Vassago for three years. His first big break comes in the form of a cute, sexy demon. When he learns the real reason Vassago is hunting her, Dagon has more trouble than he bargained for. Not only was Vassago sent to guard souls in Purgatory after screwing up his assignment with Jahi, but the person who paid him to destroy her is one of her fellow demons.
Laura’s Review:
I’m not a huge fan of paranormal romance.  I like to be able to relate to the characters in the story, so when said characters are bizarre, mythical creatures, I have a really hard time getting into the story.  Because of this, I was little skeptical when I started Hunted, a story that centers on the romance between an angel and a demon.  I was very pleasantly surprised to discover that in this particular novella, “angel” and “demon” were basically just terms to describe the characters.  Substitute “stableboy” and “lady” and it would have had the same effect, because even though Dagon and Jahi had certain magical abilities, they behaved just like any other couple who has been forbidden from being together.
I can’t really say too much about the plot of this story because it’s under 100 pages and I don’t want to give anything away.  Things you should know: 1. Jahi is a demon being hunted.  2. Dagon is a fallen angel (read: bounty hunter) assigned to capture the fallen angel who is hunting Jahi.  3. Demon/Angel relationships are a huge no-no.  4. Jahi and Dagon are so drawn to each other that they throw caution to the wind and have an absurd amount of incredible sex.
Wondering what Jahi’s fate was going to be really kept me in the story.  I had a bit of a hard time believing that Jahi and Dagon would fall for each other so quickly, but by the end of the story I understood it a little better.  I always like it when I end up enjoying a book that I was a little iffy on to begin with.  I think it’s a great testament to the art of storytelling, and the talents of the author.
Laura's Rating: