Review: Pushed to the Limit 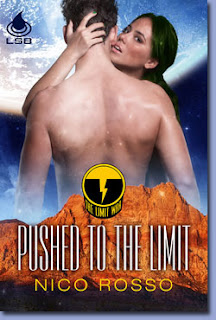 Description:
Teryn Pilander lives in a world of secrets. She is a Shadow Corps operative for the Core Army in the Limit War, trained in espionage. Her latest mission takes her to the planet Viela, drawn by a communication that the local government captured a Dusk Warrior Officer for questioning. More interesting than the message, though, is the voice delivering it. A little shy, but deep and strong, the masculine voice sparks dormant fires in Teryn. She tells herself that once the mission is over, she might put her spy self away for a bit and live a little as a woman.

Drel Kol has secrets of his own. He is the one who sent the message drawing Teryn and her team to his planet. But he was just following orders and led her into a trap. Now, the woman he spoke with could be in grave danger. Her voice alone is enough to ignite a passion he has never known. Yet he's only a technician. Can he fight against his own government and the Dusk to save her? And will the new bond between Teryn and Drel be torn apart when she learns his secret?
Annie’s Review:
“Pushed To The Limit” is the second in Nico Rosso’s Limit War series. I was concerned about reading book 2 without reading book 1. Fortunately it wasn’t an issue.
By the second paragraph you knew that Teryn Pilander, a Shadow Corps operative, was going to do whatever it took to meet Drel Kol in person. Drel was just a voice up to this point but, oh, what a voice! Unfortunately, he had (unwillingly?) led her into a trap.
I could barely put my Kindle down while reading this book. I found it so easy to allow my mind to picture Teryn and Drel as he helps her hide from the Dusk Warriors and free her shipmates.
“Pushed To The Limit” is a wonderful blend between romance, action/adventure, and science fiction. I enjoyed the author’s writing and am looking forward to reading more works by him.
Annie's Rating: