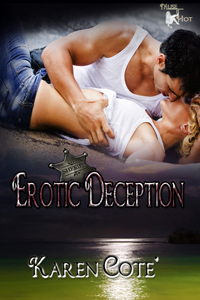 Description:
Her brother was dead. He’d practically raised her and stood by her during a miscarriage that left her barren. He’d been the sole person she’d had left in this world. How had Dr. Lily Delaney with a PhD in Psychology missed the psychotic signs of Anthony Capriccio, the Kansas City District Attorney and her ex-fiancé? Now at twenty-nine she was on the run to hide from the impending threats to her own life. But on the road to a safe secluded lake community, Lily crashes into the path of a new dangerous element, literally. One with deep blue eyes who totes a badge and carries a gun. And would their budding relationship be threatened when Lily finds out her own doctor had lied and discovers she really can have children? How would the sheriff take knowing she’d gotten pregnant when she’d already heartily assured him she wasn’t?
After his experience as a detective in Kansas City, Missouri, Jet Walker enjoyed his life as sheriff of the quiet lake community, Windom Hills. However, when Lily Delaney literally crashes into his car and life, his world disrupts into chaos. Couldn’t the woman do anything normal? Between fighting to protect her and fighting against his growing attraction for her, the previous peace Jet had found was now falling apart. And how could he possibly trust another woman after the trick his ex-wife played in trying to pass off another man’s child as his?
Laura’s Review:
What do you get when you take a beautiful doctor trying to find her brother’s murderer, a small town, and a sherriff who is too arrogant and gorgeous for his own good?  Erotic Deception.  This book was a short, fast-paced read that I enjoyed.
Dr. Lily Delaney is out to prove that her psychotic ex-fiancé murdered her brother.  To do so (and to put some distance between her and the crazy), she head to her brother’s lake house to clear her head and look for clues.  After causing a car accident because she was so distracted, Lily seems to make an enemy of the town sherriff, Jet Walker.
Clearly, because this a romance novel, Lily and Jet are going to hook up at some point.  In fact, despite their constant bickering, their relationship progresses pretty well.  Until all of their respective closeted skeletons start making an appearance.  Both main characters have some serious damage, and neither one is willing to open up to the other.  They’re forced to be together because they’re working to solve Lily’s brother’s murder, but the tension is definitely palpable.  And just when you think you have the mystery solved, a nice little twist is inserted.
I love books with strong characters and plot twists, so Erotic Deception was pretty enjoyable for me.  The only thing I didn’t like was the primary cause of conflict between the two characters, but that’s because I detest pregnancy storylines.  I suppose in this case, it served its purpose, but I would have preferred a different plot device to create conflict.  I would recommend this one, because it was fast-paced and because it never got boring.  It was the perfect length to cover all the major points, but still managed to reveal details and plot intricacies.
Laura's Rating: