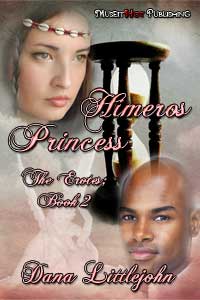 Description:
Icie was the chief's daughter, princess of the Seneca Indian tribe. Her duty was to marry the chief of the Cayuga tribe to form a union between the two tribes. She had come to terms with the fact that she would be locked into a loveless marriage for the sake of her people, but she had no idea it would be to such a cruel and dishonorable man. Backed into a corner, Icie felt her only option for a future was to run. Luckily for the princess Himeros had other plans for her future.

Joey’s Review:
Icie, a Seneca princess must marry the chief of another tribe, but runs from her duty when she realizes her intended doesn't have honorable intentions. Then things go a little haywire when the gods step in.
Unfortunately, I just didn't feel this story. I was involved in the beginning, and then simply fell out of the story when the time-travel element kicked in. My problem, I feel, is such limited space (the story is only 15,000 words) doesn't do justice to complicated themes. Short novellas have to have a get-in-and-get-out approach to story development. Take a simple theme and work it. (That's just my personal opinion, however.) There was too much going on and not enough space to explain it. I have no idea why Greek gods popped in briefly. Icie barely reacts to suddenly being in a future filled with things she's never seen. I don't know why she and the hero connected. I'm sorry to say that, when I finished reading, I simply felt that the story fell victim to too big a vision on too narrow a canvas.