Review: Secrets in the Sand 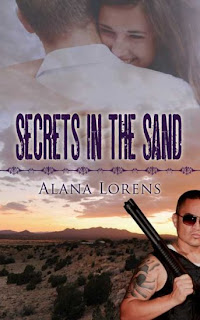 Description:
After a run of bad relationships, Lily Pearl Evans has finally become an independent woman. In the New Mexico desert town of Chaparral, she works for herself in her own house,  she sets her own rules, and she's determined no man will hold her back again.
Gene Nicholas worked for more than a decade to achieve his dream to be a doctor. Wanting to share his gifts with those less fortunate, he leaves South Florida to volunteer for a tour with Doctors without Borders in Mexico.
When Gene provokes a showdown with the local Mexican drug cartel, he becomes a man with a price on his head. On the run, he ends up on Lily’s doorstep, a mystery man forced to conceal his past to protect them both. With the cartel’s dangerous web drawing tight around them, can Lily and Gene survive a druglord’s revenge?
Laura’s Review:
Secrets in the Sand is one part Deadwood, one part romantic comedy, and one part Dolly Parton. Trust me when I tell you that’s a good thing. This book made me laugh, made me shake my head, and kind of sucked me in.

Gene Nicholas is on the run. While participating in a Doctors without Borders type program in Mexico, he just happens to murder the local drug cartel’s leader. In a panic, Gene flees across the border and ends up in a tiny town in New Mexico. He stumbles upon the Sassafras Social Club, which in all honesty is totally the Best Little Whorehouse in Texas New Mexico. The madam, Lily Pearl Evans, takes him in and helps nurse him back to health. In time, Gene becomes an invaluable member of the brothel’s community, serving as handyman, piano player, and doctor. He also starts to fall hard for Ms. Evans.

Lily is a very strong and stubborn woman. From the very first, all I could see in my head when I read about Lily was Joanie Stubbs from Deadwood. She was the mother figure, the caretaker, and ballsy enough that the men in town knew better than to cross her. But despite all of that, sometimes Lily feels like something’s missing. Of course, when that something shows up on her doorstep half dead, she’s a little reluctant to let him into her life and her heart.

What follows is a great story as Lily and Gene get to know each other. Both of them know that Gene’s past could come back to haunt them, but they both tend to push those feelings to the side. Until the past shows up.

I really liked this story. It was sweet, it was simple, and the cast of characters was magnificent. One of the things I liked best was that Gene and Lily aren’t beautiful 20-somethings falling in love at first sight. They are both a little older, a little wiser, and much more cautious. They let their romance blossom slowly, which I found to be a nice change from the “hero meets heroine and 2 days later they’re shacking up and planning a wedding” scenario that sometimes populates romance novels. There also isn’t any sex, which may seem odd for a book set in a brothel. Sure, sex is alluded to, but there isn’t
an actual sex scene in the book. I think that works beautifully for the lead characters, as they are both a little bit reserved. I think a hot and heavy scene between them would have cheapened their romance.

This is a good quick read that will leave you feeling warm and fuzzy inside. Definitely worth checking out.
Laura's Rating: