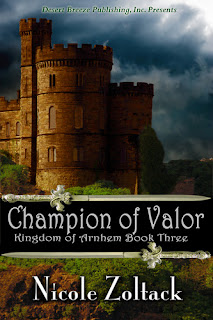 Description:
The Mystical Conch Shell of the Sea has been stolen, and it's up to Selliki, the selkie, to get it back. Selliki sets across the continent of Alethereia to find Arnhem, and Gabrael, the mage she loves. Selliki knows that no union between a selkie and a human have ever had a happy ending, but neither can ignore their feelings. Each night, they experience terrible, real dreams that show how doomed their love is.

The final war between Speica and Arnhem is threatening the entire world. Lucifer has aligned himself with Speica and wants nothing less than to bring about the Apocalypse before its time. In the last battle, cowardice is revealed, promises are broken, and many people die. Trolls fight icthyocentaurs, dwarves armed up against the Drow, angels against demons. Only one kingdom will prevail; that is, if the world doesn't end.


Annie’s Review:
I asked for Champion of Valor because I enjoy reading fantasy books. It also appealed to me because I already knew what a selkie was. I was not aware that this was the third and final book in a series. I became aware of that when I received the files. I thought, that’s okay I’m sure there will be something of a recap in the first chapter. I was wrong and often found myself completely clueless.
This was not an easy book to read, nor was I enjoying it. I am used to reading books with several different types of mythical creatures but there were just too many in this book. Haugtrolds (trolls), dwarves, mages, selkies, ichthyocentaurs who want wings because horse legs and a dolphin tail isn’t enough, merfolk, a kelpie, a shadow warrior, Drow (species unknown), Speicans (species unknown), a stone troll, Alce (who is apparently a griffin but this was never mentioned in book 3 but found in a synopsis of book 1 (or was it 2?)), a mammoth talking spider and a cast of mostly human characters who apparently have history together but unless you’ve read the other books you have no idea what the back story is. They were fighting for control of the Golden Conch but apparently no one knew what t could do. And as if the menagerie wasn’t enough, we have archangels fighting demons and Lucifer for the “light and the truth and for our Lord and Savior”.
There were just too many subplots going on. If this was broken down into multiple short shorts or even more books in the series it might have a more enjoyable story. As it stands, I just couldn’t lose myself in the pandemonium.