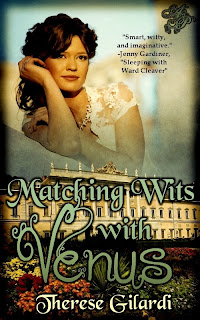 Description:
For centuries Cupid has longed to be more than Venus’s arrow boy.  When he’s sent to eliminate “Happily Ever After by Amelia”, the matchmaking business threatening Venus’s status as the goddess of love, Cupid decides to steal Amelia’s methods and make his own matches.  While spying on Amelia, Cupid accidentally shoots himself with his magical arrow and falls in love with her.  But bereaved Amelia doesn’t believe in the existence of Roman gods, and she’s certainly not looking for romance.  She’s too busy perfecting the patented personality profile that’s made her Hollywood’s favorite matchmaker.
Disguising himself as a mortal financial advisor, Cupid manages to break through Amelia’s guarded exterior.  As their passion deepens so does Cupid’s guilt about deceiving Amelia.  Cupid’s interference with Amelia’s life causes her business to falter, leads to a sterile spring that threatens the animal kingdom and shatters the longstanding peace between the Roman and Greek gods.  With the fate of the natural and under worlds at stake, Cupid must decide whether to reveal his true identity and risk losing the chance to live happily ever after with Amelia.
Joey’s Review:
I liked Matching Wits with Venus. It's one of those stories you want to reach out and pinch on its literary cheek. Romances have a basic structure: Boy meets girl, smut ensues, drama happens, and then resolution comes in the nick of time. It's always fun to find a story that doesn't linger so much on the smut. Don't get me wrong - I enjoy a good steamy scene. But sometimes I like to chill out with a sweet contemporary. It's a welcome change of pace. I enjoy seeing character interaction leading us to the happily ever after, and I don't always need the interaction to include love nubs, if ya know what I mean.
The cute twist on this story is that Cupid, shooter of arrows of lurrve, gets a taste of his own medicine. On a mission to scope out a match-making service owner who threatens the career of his mother, Venus, Cupid meets his match. Amelia, a woman who thinks making love-matches has little to do with hearts is successful at what she does, but isn't so successful at that love thing. Her heart, despite her reluctance, is won over by Cupid, who is masquerading as a businessman in need of a love-match.
I keep declaring this story cute. I hope it doesn't sound trite. It fits the category of sweet contemporary, because it is sweet. It takes mythology we all know from elementary school and brings it into the twenty-first century with endearing results. I enjoyed this read and think you will too.