Author submission in exchange for an honest review.
Title:
The Ravaged Fairy 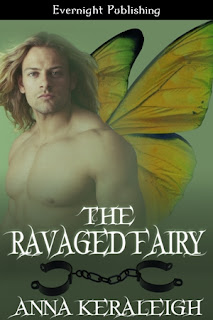 Description:
What would happen to a fairy without wings?

Thame is a warrior, a golden fairy who is loyal to the King and new Queen. They are on the verge of war with the Trolls. It’s an ongoing battle that he fought with success...until now. The enemy captures him, cuts off his wings and strands him on the remote Aran Islands. His escape is a miracle, but the night is still young.

Breena never expects to find a half-naked man with a mutilated back in the middle of her home. Now she finds herself in the middle of a war she didn’t even know existed on top of discovering she’s only part human.


Laura’s Review:
The Ravaged Fairy is the second in a series of fairy novels by Anna Keraleigh.  I reviewed the first book in the series awhile back, and liked it well enough.  This story picks up right where the first left off, which is great because I thought the first book ended at a really odd point.


The fairy kingdom is dying out.  Male fairies can’t seem to get the female fairies pregnant, so they have started venturing into the human world to find a mate.  In book one, the fairy king finds his queen, she’s captured by trolls, and a whole series of events are set off that basically lead to book two.


Thame is a great fairy warrior.  He was injured by the trolls while defending his new queen.  His wings are cut off, and he’s basically wandering around, dead on his feet, when he finally just collapses on some back country road in remote Ireland.  Enter Breena, our heroine.  She finds Thame, brings him to the cottage she shares with her grandmother, Abigail, and the two of them nurse him back to health.


And because this is an erotic romance, Breena finds herself lustfully pining away for Thame.  Abigail warns Breena not to get involved with Thame (it turns out that Abigail has some sort of past connection to a fairy – I hope we get that story at some point!), but Breena ignores her.  Thame recovers and starts to make plans to return home.  The only problem is that he doesn’t want to leave Breena behind.  In the end, the decision is made for him, as the trolls attack the cottage, and a host of fairies shows up to rescue Thame, Breena, and Abigail.


Once they get back to the fairy kingdom, Breena and Thame grow even closer.  They finally have sex, in a variety of ways which are all rather detailed.  Things are starting to fall into place for their life together. The trolls seem to quiet down, but I’m pretty sure it’s just the calm before the storm.  I have a feeling that book three is going to have some major conflict going on.


I liked this book, but it was very clearly a stepping stone to future books.  You know in The Two Towers that things are happening that will probably have some bearing on future events, but at the time, you really don’t know why this is so important?  That’s how I felt about this book.  I’m sure that some of the characters are really going to come into play – like I said, I’d love to hear Abigail’s story.  I know the trolls are coming back.  We’ve also been introduced to the queen’s human cousin, who I imagine will make her way into a future book.  So far, this is a fun little series.  It’s not too deep, but it isn’t total fluff either.  It’s a good quick read that will at least keep you entertained.