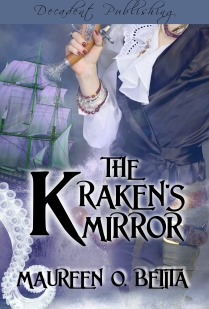 Description:
Treated by our youth oriented society as invisible and sexless Emily Pawes attends a pirate festival to recapture the make believe magic she knew as a younger woman. She wins an interesting bit of booty at an old woman's bric-a-brac stand. The Kraken's mirror is a magical portal and transports her to a land of Hollywood piratitude, where swashbuckling heroes own iPods. With little choice, she embraces the madness, deciding she’ll play pirate until she figures out how to get home. Or wakes up in a padded cell.

Instead of men in little white coats, she encounters the handsome Captain Alan Silvestri. He is a man haunted by a strange curse. Good luck is his to command, but it comes at the cost of any place to call home or people to call family. Resigned to die shunned by all, forced to sail every three days, he begins to dream of a special woman.

When they meet, sparks fly, passion flares. He needs her to be free, but more than that, he needs her to be whole. They set sail, uncertain of who has control of the wheel, seeking to defeat his curse of good luck and discover all the Kraken’s mirror plans for them.
Deniz’s Review:
I wanted to like this book, I really did. The hero and heroine are delightful – she’s an elderly widow (yes, that doesn’t sound like an auspicious starting point for a romance, but she’s got pluck, and vibrancy, and knows how to mix drinks) and he’s an ill-fated (okay, cursed) pirate from a different time – and they meet under exciting circumstances, drawn together by the power of the Kraken’s mirror.
The story failed for me, however, during their first bedroom scene. He knew who she was at that point but he was not only a mystery to her, she was also temporarily blinded. Not the most romantic of scenes, and their familiarity with each other and her constant swearing during the encounter seemed altogether over the top. Others who enjoy being browbeaten with that sort of language might not mind it as much as I did, however. And that's just the way Emily is.
Later episodes, as Emily and Alan got to know each other, were sweeter, and the final adventure and ending – well, I won’t spoil the ending, which was exciting and tense. On the other hand, one last round of copy editing might have cleared up some past/present tense confusion, and made for a smoother read.
The overall tale would be perfect as a movie – the supporting characters are well fleshed out, and I quite enjoyed the descriptions of the island of Tortuga and its inhabitants, all caught by portals and arriving from different times and places. I kind of wish I could be tending bar there myself...
Deniz's Rating: