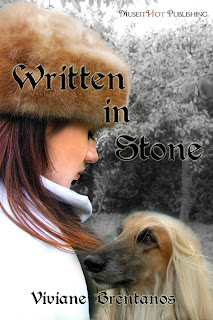 Description:
Dumped five days before her wedding, Cassandra Hall decides not to waste the honeymoon.  She sets off to London. What was supposed to be her dream week turns into a nightmare time of introspect, self-doubt. Then she meets James, literally falling at his feet in an attempt to save his Afghan hound from colliding head on with the traffic.
James is witty, charming, too good-looking and also--not available. Despite this, Cassie is captivated by him. What follows is a week of fun, companionship and a bonding that Cassie has never experienced.
James, sensing Cassie’s unhappiness, goes out of his way to make up for her jerk of a fiancé’s rejection.  He is drawn to her vulnerability--something he finds disturbing, threatening to shatter all he thought he knew about himself.  Cassie, he senses, is falling in love with him. He ought to back away but cannot. Cassie bravely makes her true feelings known and when he rejects her, he knows he has broken her heart. He is left confused, guilty because....James has a secret.

Cassie is in London, on her honeymoon. One problem though: there's no groom. Seems her betrothed decided a few days before the wedding that he wasn't quite ready for a commitment, but 'generously' allowed her to take the honeymoon trip on her own. Cassie is rightfully upset, but maybe not as upset as one would think she should be. That's because a chance encounter with a maniacal show-dog and a pyjama-clad pursuer of said dog takes Cassie down a very unexpected path. Embarking on a whirlwind London vacation with her new-found friend, any lingering hurt over her unceremonious dumping by her fiance is effectively squashed.
James is a well-known photographer. And he's very easy on the eyes. And he's as entertainingly adorable as Rupert Everett ala My Best Friend's Wedding. And Cassie becomes rather smitten with the man. Who could blame her? James is a guy who could be an arrogant prig, considering his photographic background, but who turns out to be the kind of guy who loves to spend lazy Sundays reading trashy tabloids and dragging his new friend Cassie out in the rain to play uh, Debbie Reynolds to her Gene Kelly. And he's left his fashion photog roots behind to use his talents for good: James is a sensitive guy, and is prone to getting himself in jams because he's running off to save the apes, or whatever cause appeals to his desires to make the world a better place.
The only problem for Cassie is that James is rather, well.... chaste around her. Friendly pecks on the forehead, etc. She can't tell if she inspires the same passion in him as he does for her. So when the time for her pseudo-honeymoon draws to a close, Miss Cassie makes a drastic decision. She will try to seduce James, to see if he responds.
Well, he does. And Cassie thinks all systems are go for a moment. But for some reason, he is enraged by her seduction and pushes her away.  Eventually, he explains. See, James had been honest with Cassie about his own shaky relationship with a lovely model named Alex. They were 'on a break' and James has to decide if he wanted to marry Alex or not.
After Cassie flees from the embarrassment of her failed seduction, James forces a confrontation. Turns out Cassie made a huge error: She thought Alex was a woman. Not so. Alex is James' estranged male lover.  James reveals he is gay, which isn't exactly what Cassie was expecting.
This is where the story really gets interesting. Because James also reveals that he's fallen in love with Cassie, someone he considers a true soulmate. now, you're probably thinking a whole bunch of cliched storylines come next, and you'd be wrong. Because the love James feels for Cassie vs. the love he feels for Alex is the best part of this story. Reading the contrasts between the two relationships was so mesmerizing for me.
While the obvious comparisons between heterosexual relationships and gay relationships come to your mind as you're reading, what I enjoyed most about the writing was that James being gay had little to do with anything. It was simply about two loves in his life.  He loved Cassie because she suited him in so many ways. He loved Alex because, well, I won't give away the whole story. I think I'll let you discover those complications on your own.
Viviane Brentanos has already earned a five-star review on this site for a previous submission. I admit, when I saw her second submission, I selfishly snagged the story because I wanted to see what all the raves were about. I can see why now. Her writing is very fluid, and very colorful. As a writer myself, and one who loves to try to achieve new twists on old subjects, I was very impressed with her handling of the storyline. She could have easily taken the cliched route, but instead, she created a complex tale where love knows no labels. It just is. It isn't about sex. It isn't about duty. It's about your heart staking claim whether you want it to or not.
Most importantly, for me as a reader, I couldn't tell how the story would end. Would James ultimately end up with Alex, or with Cassie? And the best part was that I could have been happy either way. Alex, initially painted as quite the arrogant prima donna model soon showed his true colors-someone who was painfully in love and terrified of losing James. And Cassie grew as a person, becoming stronger and more independent, even though she ached for her new love. You could see reasons for James belonging with either one. And even though I was happy with the ending, I still ached for the other person.
Boy, ramble much, Joey? Well, needless to say, I loved Written in Stone, and highly recommend it!
Joey's Rating: