Review: The Genie of the Portrait

Publisher submission in exchange for an honest review.
Title:
The Genie of the Portrait
Author:
Misty Burke
Release Date:
February 16, 2011 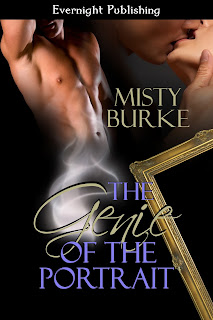 Description:
Three nights of pleasure…will it be enough?

Amanda had always been forgiving, until the night of her engagement. It was at that moment, when she found her fiancé banging the waitress in the bathroom, that she changed. Never again. Men were not going to use her ever again.

So when she found William’s portrait and learned that his sole purpose for existing was to please her, an electrifying relationship resulted. Her genie offered her three nights of pleasure. And Amanda quickly realized she wanted more.
Joey’s Review:

The Genie of the Portrait is a short, cute piece of escapist paranormal romance. This is one of those stories where you just kick up your heels and go with the flow.

Amanda's boyfriend finally proposes to her, but in the most unromantic way possible. The engagement doesn't last long, thanks to her new fiance's appetite for trashy flings. After the relationship implodes, Amanda finds herself alone and unhappy.

Until a handsome man appears, released from an old painting. Turns out the man, William, is a genie-like entity, there not to grant three wishes, but three nights of pleasure.

And he does it well. But Amanda isn't an empty pleasure kind of gal, and she wants more than three nights with William. Her determination to help him escape his curse changes everything.

Like I said, this is a cute story, a great length for one of those nights when you just want to relax for a bit, and enjoy a little out-of-the-ordinary story. It's been given a heat rating of 2, which fits the story nicely. Want a short but sweet story? Try this one.