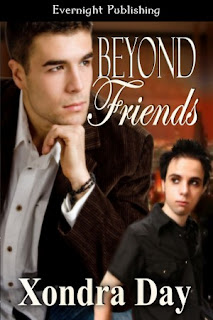 Description:
Long time friends and one time lovers, Jack and Rain, are now at a crisis in their relationship.  Polar opposites, each harbour romantic feelings for the other, but are afraid to own up to them.

When a tragic event happens in Rain's life, he looks to Jack to help him pick up the pieces, realizing there has only ever been one man in his life that he has truly loved-Jack.  But will Jack return his love? Can they ever be more than just friends?
Laura’s Review:

Jack is a repressed, 22 year old, gay man.  He’s head over heels for his friend Rain, but flatly refuses to admit it.  The fact that he hasn’t been able to forget the one rather torrid encounter that he and Rain shared six months ago is completely beside the point.  It turns out that Rain, despite his nonchalance, can’t forget that night either.
Jack has been in a bit of a funk, so Rain decides to take him out to cheer him up.  And boy, does Jack get cheered up.  He ends up heading home with Jeremy, some random that he met on the dance floor.  Rain isn’t too happy about this development, but heads home with his own random man for a hot night….where he ends up lamenting his missed opportunities with Jack.  Jack, on the other hand, has an exceptionally hot night with Jeremy.  He thoroughly enjoys himself, until the next morning, when Jeremy just walks out.  Jack can’t quite seem to wrap his head around the fact that he just had his first one night stand.
To say that Rain is bitter or jealous of Jack’s night with Jeremy is a bit of an understatement.  So in sulky retaliation, Rain decides to give a guy named Nick a call.  Well.  Things with Nick turn out pretty badly, so Rain calls on Jack for comfort.
There were a couple things that I liked about this story, and a couple things that didn’t make me happy in the slightest.  Let’s start with what I didn’t like.  Rain and Nick.  The entire scene with them really bothered me, and maybe because it was so real.  I don’t like conflict like that in my romances.  The second thing was the age of the characters.  They were so very young.  Jack was only 22 and Rain barely legal at 18, yet at the same time they claimed to be so deeply emotionally invested in the other.  It just made me wonder what would happen if we were to revisit Jack and Rain a few years down the road.  Realistically, I just didn’t see them staying together.  I guess what I really wanted was more of the emotional bonding and less of the sexual bonding.
On the other hand, I really liked the way that this story was told through the point-of-view of both Rain and Jack.  It really let me connect to each of them and let me understand what drove them towards each other.   Jack was really my favorite part of this story.  He’s uncertain at times, and sometimes pretty naïve, but he comes through in the end.  I would love to see more stories about Jack, but I suppose that would defeat the purpose of this story’s happily ever after.
Laura's Rating: