It's Friday, and you know what that means: time for Friday's Featured Author! This week, we're featuring paranormal romance author Melissa Hosack. Please welcome Melissa to the blog, and be sure to comment to be entered in Melissa's giveaway at the end of the interview! 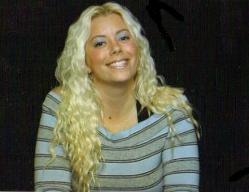 Tell us a little about yourself, Melissa:
My name is Melissa Hosack. I live near Pittsburgh, Pennsylvania with my husband Jeremy and our son Marshall Frost. We have four pets: Duke and Edge (dogs), Eddie and Leia (cats).
My first short story, More Bark Than Bite, was published by Mystic Moon Press in September of 2008. My full length novel, Deadly Encounters of the Supernatural Kind, was published through Whimsical Publications on March 20th, 2009. Whimsical also published Hunter in December of 2010. I also have a short story Do It Fur Love coming out in an anthology titled Indecent Encounters on February 9th, 2011 through Evernight Publishing.
Tell us about your book:
My most recent release is titled Hunter. It is a paranormal romance which was published through Whimsical Publications on December 13th, 2010.
What is Hunter about?
This story is about a vampire named Gwen who is a private detective for the supernatural community. She runs a business with her best friend Colton. Gwen has a real chip on her shoulder where elves are concerned, so when she’s forced to work with one, she isn’t too thrilled. It doesn’t help that he’s drop dead gorgeous and not at all what she expected. Below is the blurb for the book, which will better tell the story.
Real Elves Don’t Make Cookies
If there is one thing Gwendolyn Fox hates more than sunlight and stakes, it’s elves. There’s a good reason why vampires and elves avoid one another, and it’s because they don’t mix well.
Gwen is a vampire who knows how to take care of herself. She’s fought werewolves, witches, and other supernatural creatures all for the sake of protecting those weaker than her. She has nothing in common with the stereotypical blond, fragile, and earth loving elves. That is until an innocent child gets kidnapped, and the only man who can help Gwen save her is none other than Hunter Price.
Hunter is an elf, but like none she’s ever met. Rugged and mischievous, Hunter sparks an immediate reaction in Gwen that she struggles to resist. Try as she might to keep her concentration on the missing girl, Gwen falls victim to Hunter’s devilish charm and seductive nature. He’s tall, dark, and dangerous. He’s everything she never expected of an elf and everything she’s attracted to in a man.
An expert on breaking and entering, Hunter has the means to get Gwen into the facility where the child is being held. During their encounters with otherworldly villains, the magnetism between them becomes too much to be ignored.
Despite her instant attraction, Gwen is determined to keep things between herself and Hunter completely professional. Hunter, on the other hand, is determined to seduce his stubborn and guarded vampire partner. Together, they’ll strive to rescue the imprisoned girl and save the local supernatural community from a vicious werewolf pack.
To rescue the little girl, Gwen needs to stop Hunter from distracting her. She must cool her sizzling partner or let herself be consumed by the flames.
How long have you been writing? Have you been at this for a while, or is this a new journey?
I wrote my first short story in the second grade. I knew right then and there that I wanted to be a writer. I love creating my own worlds and falling in love with my own characters. It is unbelievably hard to kill off a character once you’ve grown emotionally attached to them, but in my genre, death must happen. You can’t have bad guys with supernatural powers and not have them do atrocious, unforgivable things like killing one of the good guys.

What inspired you to write Hunter?
I was thinking about the stereotypical elf in my mind, picturing what I would expect if I ran into one. I pictured Orlando Bloom from Lord of the Rings or Link from Zelda. I just pictured a man with long, blond hair. To me, the word fragile always comes to mind. I picture an elf hanging out in the woods, being one with nature and taking care of the environment. Well, I decided I wanted to do the exact opposite. What is the point of creating your own worlds if you don’t shake things up a bit? I took all those stereotypes and flipped them upside down. Hunter isn’t blond and pretty. He’s dark and dangerous. He isn’t angelic and at one with nature. He works in a greasy garage fixing cars, and *gasp*he even smokes. And don’t even ask him to use a bow and arrow, because it will only make him mad.
What tools have you used in your journey to improve your writing?
I enjoy the horror genre as much as I do romance, so I usually combine the two. To help me improve on my plot lines, I took a bunch of psychology classes at the local community college. What better way to get into the mind of your bad guys than to take classes like Crime Literature or Abnormal Psychology where you study serial killers? I also took a few English and Creative Writing classes as well.
Are you a solitary writer, or do you utilize critique groups?
I am solitary. I am very shy about showing anyone my work. It was only in recent years that I even started putting anything out there for others to see. My husband does all of my editing for me. Before I even think about submitting a story, my husband will go through it multiple times until we feel it is nearly perfect. Only then will I let anyone else take a peek. My mother will also sometimes take a look at things before I send certain stories out, though her input is much different than my husband’s. Where he concentrates on grammar and plot holes, she tells me which characters and scenes really make the story for her. I’ve been scolded on numerous occasions for being far too mean to her favorite characters. I always assure her that the more horrors I put a character through, the more I like them.
How much of yourself is present in your writing? Do you look back and find that characters possess a little of your own self in them?
Actually, I don’t see myself in my writing at all. Many of my characters have a life of their own. I put my pen to paper, and sometimes I’m shocked by the outcome. I was writing a scene yesterday, and the main character decided he wanted to propose to his girlfriend. I was completely shocked by this development, because I had no marriage plans for him at all in the near future. I was like, ‘But you’re too young to get married!’.  He wanted to do it though. Now I’ve got a last minute wedding to help plan…
Tell us a little about you, the reader. What authors/genres do you love and why?
I love to read anything paranormal I can get my hands on. Vampires, werewolves, demons…I love them all. I especially enjoy series. If I fall in love with a character, I don’t want their story to end after one book. Some of my favorites are Katie MacAllister’s Aisling Grey series, Kim Harrison’s Rachel Morgan series, Laurell K. Hamilton’s Anita Blake series and her Meredith Gentry series, Annette Blair’s witch series, and Mary Janice Davidson’s Betsy the Vampire Queen series. I also enjoy young adult books too. James Patterson’s Maximum Ride series is on my must have list when a new one is released. As well as Eoin Colfer’s Artemis Fowl books.
Who is your literary idol and why?
I don’t know about idol, but I was inspired to write in the vampire/horror genre by Anne Rice. Lestat was the first vampire I read about, and he changed my life. I couldn’t imagine anything more interesting or fun than vampires. That is where my obsession started.
Name one character in any book that you would like to share a cup of coffee with. What would you discuss?
Hands down, that would have to be Artemis Fowl. Not only did he make millions before he could even drive, he discovered and infiltrated the world of fairies. It was genius of Colfer to make his main character a ‘bad guy’.  To watch Artemis’ transformation from bad guy to the hero throughout the series has been amazing. I would ask the boy genius how to get rich quick, but seeing as his plan for that in the first book involved kidnapping, perhaps that isn’t the best question.  Perhaps he’d give me financial advice in exchange for advice in the romance department, because the poor boy isn’t very smooth with the opposite sex.
A big thank you to Melissa for appearing on the blog! To learn more about Melissa Hosack and her writing, please visit her website at https://sites.google.com/site/melissahosack/.
Melissa has kindly offered up a signed paperback copy of her novel, Hunter, to a random commenter on this post. Winner will be chosen Sunday, and contacted privately for address information. Good luck!
Posted by The Project at 7:13 AM