Review: The Way They Were

Author submission in exchange for an honest review.
Title:
The Way They Were
Author:
Mary Campisi
Release Date:
October 30, 2011 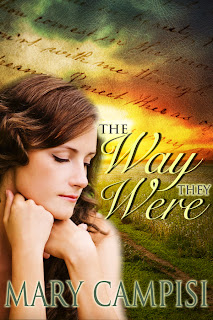 Description:
He hasn’t spoken her name in fourteen years. She keeps a journal hidden in the back of her closet and permits herself to write about him once a year—on the anniversary of the first and only time they made love. They promised to love one another forever, but tragedy tore them apart. Now, destiny may just bring them back together.

At eighteen, Rourke Flannigan and Kate Redmond thought they’d spend the rest of their lives together, until a family tragedy tore them apart. Fourteen years have passed and they’ve both carved out separate lives hundreds of miles apart – hers as a wife and mother, his as a successful, driven businessman. But once a year, on the anniversary of her daughter’s birth, Kate pulls out a red velvet journal and writes a letter, which she’ll never send, to the man who still owns her heart. Once a year, on the anniversary of the first and only time they made love, Rourke permits himself to read the annual investigative report detailing an ordinary day in Kate’s life.

When a subcontractor at one of his holding companies is killed, Rourke decides to pay the widow a visit and offer condolences, never dreaming the widow will be Kate. As they embark on a cautious journey of rediscovery, one far greater than they could have imagined, secrets and lies threaten to destroy their new found closeness – forever.
Brandi’s Review:
Do you like flawed characters? Those people who make huge mistakes and aren't as honest and loving as most heroic characters are?   Then this is the book for you.  Rourke is well, kind of a jerk.  As a love saturated teen tragedy strikes, ripping his love away and then he's dumped into his predestined life all while still in shock.  Of course instead of getting things figured out and getting mad about why his woman married someone two months later, he turns into a ruthless business man.  His coldness doesn't stop when he inherits his niece after her mothers death.


Then there is Kate.  Who is also partly involved in the tragic event that splits up her and Rourke.  But instead of fighting for her man, because come on what teenage girl doesn't throw a huge hissy fit if her boyfriend just leaves, she ups and marries another man she doesn't love just because she's pregnant.  Because it's 1896 and not 1996.  Then stays married to this man for 15 years, all the while never loving him as she should, while he works hard and loves her daughter.
There were a few things I didn't understand really.  One was the marriage thing, it just seems unrealistic.  The other was why Rourke was so crappy to his niece but then when he found out he had a daughter the same age, he changed his tune. And the two people I felt sorry for during most of the story were the children.  They both had their worlds turned every which way, one being treated awfully and the other feeling betrayed. However, the attraction and the push and pull between Rourke and Kate was very real to me.  It's something I personally experienced so I very much related.   Overall it was a good read.
Brandi's Rating: