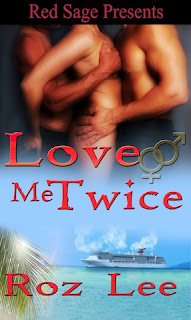 
Sean Callahan came aboard the Lothario to do his brother Ryan a favor, and ended up the man in charge when both Ryan and Richard left the ship with the women they love. The last thing he needs is a complication, and Celeste is definitely a complication. Once upon a time Celeste had been part of his team as well as his lover, but after a disaster of a mission, and the realization that the other member of his team, Drew was in love with her too, she'd disappeared. Now she’s back, and it’s high time she choose.
Some women have all the luck. Celeste just isn't one of them. All the luck she seems to have is the bad kind. How else can you explain ending up on a ship with the two men she's tried to forget for the last five years? Even worse, not a thing has changed. She still loves them both. Leaving them behind only postponed the decision she knows she has to make, and they aren’t helping any. In fact, they’re both doing everything they can to convince her to choose them. But, Celeste isn’t choosing anyone until she understands how their ménage a trios turned into a ménage gone wrong.
Laura’s Review:
I was really excited to review Love Me Twice because I absolutely adored the first book in the series (called The Lust Boat, also reviewed for this blog).  This is the third book, but it didn’t matter that I hadn’t yet read the second book.  This one stood on its own, though it did tie in a character mentioned earlier in the series.
Celeste, Sean, and Drew have a shared history.  The three of them used to work for the government, and five years ago, found themselves in a fairly hopeless situation.  They were all about to die, so what better to do than have a threesome as they waited to be killed. Unfortunately, this decision caused some intense complications, since they were rescued at the last second, and all three had to live with the memories of that particular sexual encounter.
The problem is that Celeste loves both Sean and Drew.  After their rescue, Celeste and Sean continued to be a couple (they had also been involved prior to their capture), but ultimately Sean felt that Drew was coming between them in the bedroom. Sean told Celeste that she needed to choose between them.  Rather than actually make a decision, Celeste leaves them both behind and starts over.
And then she is assigned to work a case on board the Lothario, the same ship that Sean’s brother owns.  Little does she know that Sean is currently in charge on board, and that Drew is working as the head of security on the ship.  You can see where this is going, right?  All of a sudden, the three characters are thrown back together for the first time since their rumble in the jungle (actually it was in the desert, but nothing rhymes with desert.  You get the idea).  It seems that even though five years have passed, all three of them are still harboring feelings for each other.  What’s the best way to resolve the situation? For Sean and Drew to split Celeste’s time on board between the two of them, and then force her to make a choice.  And since they are on board an erotic cruise ship, things are bound to get a little too hot to handle.
I’m having a really hard (no pun intended) time deciding how I feel about this story.  It’s clear to me who Celeste should choose, but she doesn’t necessarily agree with me.  I’m not quite on board with her reasoning, though the many ways she used to arrive at her decision certainly had some perks.  I can’t really explain why without spoiling the story, so you’ll just have to read it for yourself.  Overall, Roz Lee has done a nice job.  I need to go back and read book two in the series, and I have book four in my possession to review, but the series is turning out to be a fun, albeit rather dirty (in a good way), read.
Laura's Rating: