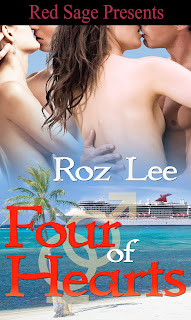 Description:
Marriage hasn’t tamed Candace Callahan’s sexual curiosity, something her husband Ryan is grateful for, but when she asks him to tie her up for her anniversary present, he knows he’s going to need the help of their friends, Richard Wolfe and his wife, Fallon.
Dr. Fallon Enright is the resident sex therapist aboard the Lothario - the cruise ship co-owned by her husband and Ryan Callahan. When Ryan asks to participate in one of their couple’s rope bondage classes, Richard isn’t sure it’s a good idea, but Fallon assures him all will be well.
What begins as innocent curiosity, blossoms into a polyamorous relationship none of them could have expected, but they are powerless to ignore. When the tabloids expose their new lifestyle, the foursome must choose between the love they feel for each other, or accepting society’s moral constraints.
Laura’s Review:
Four of Hearts is an interesting read.  It was a definitely different from any type of romance I’d ever read, but given that I had enjoyed the other books in this series, I was happy to give it a whirl.
Fair warning.  Four of Hearts explores a lot of sexual and relationship themes that you, as a reader, may not be comfortable with.  As with the other books in the series, anything goes (as you would expect from a series that features a boat called The Lothario as a character).  In this case, that includes bondage, Dom/sub relationships, and polyamory.  Yes, that’s right.  The four main characters (also the principles in the first two books) have come to the realization that they are all actually in love with the others.  It was a weird concept to me at first, but the more I read, the more I warmed up to the idea.  At least in the book…I don’t know that I’m suddenly going to become a swinger anytime soon.
This whole book really centers around the four characters coming to terms with their feelings for each other and for the entire situation.  There’s a lot of group sex.  And a lot of sex within each traditional married relationship.  And a lot of discussion of sex.  Really, this book is one big erotic love fest.  There are a few things to drive the actual plot – a crazy man out to get The Lothario and some crazy tabloid rumors – but really, this one is all about the sex.  In this instance though, the sex scenes don’t seem forced.  They actually come across as a natural way for the two couples involved to work through and explore these feeling that certainly don’t correspond to most people’s views.
All in all, Four of Hearts is a quick, hot, and steamy read.  Roz Lee has once again presented us with a great escape – with some laughter and romance along the way.
Laura's Rating: