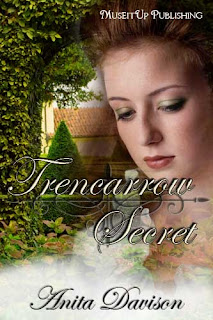 Description:
Isabel Hart is afraid of two things, the maze at Trencarrow where she got lost as a young child, and the lake where her brother David saved her from drowning in a boating accident.

With her twenty-first birthday and the announcement of her engagement imminent, Isabel decides it is time for her to face her demons and ventures into the maze. There she sees something which will alter her perceptions of herself and her family forever.

Isabel’s widowed aunt joins the house party, where her cousin confides she is in love with an enigmatic young man who surely cannot be what he pretends, for he is surely too dashing for homely Laura?

When Henry, Viscount Strachan and his mother arrives, ostensibly to use her ball as an arena for finding a wife, Isabel is determined not to like him.

As more secrets are revealed, Isabel doubts she has chosen the right man, although her future fiancé has more vested in this marriage than Isabel realizes and has no intention of letting her go easily.

Will Isabel be able to put her preconceptions of marriage behind her and take charge of her own life, or is she destined to be controlled by others forever?


Laura's Review:
It took everything I had to actually make it through Trencarrow Secret.  Not because the storyline was bad or because the plot was slow, but because the heroine, Isabel, is one of the most grating characters I have ever read.  From the first page, she struck me as so self-absorbed it bordered on obnoxious.  The other characters even admit it throughout the book – everyone’s behavior is dictated by what Isabel might think.  She’s prudish, uptight, and selfish, and not in an “I’m a young lady of the ton so I shouldn’t be too worldly” kind of way.  She is offended by everything, yet never stands up for herself, but rather allows her rage to fester inside.  At times, Isabel really reminded me of Harry Potter in Order of the Phoenix when he was so full of angsty, 15-year-old rage, that I threw the book across the room.  The only difference is that Isabel is 20.  I kept waiting for her to do something besides be a whiny and petulant child, but it never happened.   Even when her cousin ran off with a fortune-hunting rake, all Isabel could think about was how it would affect her.  She was just such an off-putting character that nothing else in the story could quite make up for it.


So let’s talk about the story.  Isabel’s family has a house on the Cornwall coast, called Trencarrow.  Every summer they invite myriad guests to stay for long periods of time.   The visit that takes place during this particular story is tinged with sadness, as Isabel’s mother is dying of consumption.  While Mama is on her deathbed, Daddy is dallying with Mama’s nurse Amelia, who also happens to be Mama’s distant cousin.  Of course, Isabel catches Daddy and Amelia in an intimate embrace, but instead of asking about it or confronting them about it, she chooses the passive-aggressive route and stomps around the house in a huff whenever either of them are around.  Of course, if Isabel ever stopped to ask a question, she might find out that Mama and Daddy never really loved each other, and that Mama has, in fact, sanctioned Daddy and Amelia’s relationship.  So much for your air of self-righteousness, Isabel.


Also of note: Isabel has been unofficially betrothed to Jared Winters since she was a child.  This visit is supposed to be when the engagement is made official.  Isabel isn’t sure she wants to marry Jared, but once again, refuses to say anything about it, and just acts offended whenever he’s around.  Of course, Jared disappears for large stretches of time, seemingly involved in something shady, so maybe Isabel should be worried.  The other houseguests are Lady Boscawen and her son Henry, who might be the only likeable characters in the story.  While Isabel quite likes Lady Boscawen, she is determined to hate Henry because he is looking for a wife.  Yeah, I didn’t really understand that reasoning either.  At any rate, Isabel must once again eat her words, as she finds herself quite liking Henry.


Eventually we find out exactly why Jared is acting so shadily: he’s broke, his father has cut him off, and so he’s decided to get involved in smuggling to earn some much needed money.  Henry, who is secretly pining for Isabel, decides to warn Jared against continuing down this road if he intends to marry Isabel.  Jared doesn’t respond well to threats, plus he’s pretty sure that his sister is going to marry Henry.  Henry doesn’t want to marry the sister, but, for some unfathomable reason, wants to marry Isabel.


Isabel has her own demons to face.  While they make her behavior a little more understandable, they hardly make her more likable.  And yet, every character in the book seems to like her.  I really don’t understand why.  At any rate, Isabel decides she won’t marry Jared, which causes him to do quite a few stupid things.   At the same time though, Isabel is taking baby steps towards finally being in control of her life.  She’s still submissive and obedient, but at least she starts to question why.


For me, the best part of the story was the last page.  Not because it ended, but because the last page contained something that I had been curious about, but never expected.  It also really explained Isabel’s character, so that helped me to understand her just a little bit better.