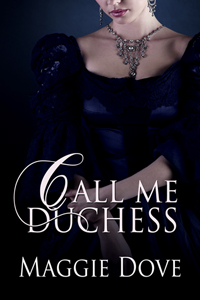 Description:
A rapist is loose in London…and he has plans for Marguerite Wiggins. Grippingly suspenseful and romantic, CALL ME DUCHESS is one young woman’s stunning journey to find love in 1870s London while a dashingly handsome chaperone, a heinous villain, and her own lofty aspirations stand in her way. Left penniless by their father, Marguerite Wiggins and her sisters must find husbands during the London season or find work as governesses by season’s end. Determined to become the next Duchess of Wallingford, Marguerite must make the difficult decision between following her heart or attaining her lifelong dreams and ambitions as a depraved rapist seeks to make her his next victim.
Laura’s Review:
A rapist is on the loose in London.   Not exactly what you want to read in a romance novel, right?  Don’t worry.  There aren’t any actual rape scenes in Call Me Duchess.  The rapes just happen to be the driving force behind the plot.
This story starts out with four separate plots and expertly weaves them into one.  Point A: Debutantes are leaving balls in the company of a certain gentleman and then retiring to the country with a sudden illness the next day (see also: rape).  Point B: The three penniless Wiggins sisters spend the season with their aunt and uncle in London in order to snare husbands on their father’s orders.  Point C: The middle Wiggins daughter, Marguerite, has been hopelessly in love with the Duke of Wallingford for several years, although she has never met the man.  Point D: The Earl of Windword’s sister managed to escape being raped, and her brother is determined to find the man who did it.
That seems like quite a bit to pack into one novel, right?  Fear not.  Everything comes together rather quickly, except for the identity of the rapist.  I guessed who it was about two-thirds of the way through, but I tend to be pretty astute when it comes to things like that.  As odd as this may sound, I really liked that parts of the story were told through the eyes of the rapist.  These bits were told in first person, and it was terrifying to be inside this man’s head.
I would say that Call Me Duchess differed from other romances in that there were four main female characters in this book, and we learned a little bit about the courtship of each one.  While the primary focus was certainly on Marguerite, the secondary characters were not forgotten.  Things really start to heat up when Marguerite, always intent on the Duke, seems to be falling for Ashton James, her chaperone for the season.  Being as stubborn as she is, Marguerite refuses to recognize her feelings for Mr. James until it is almost too late.  There is a dreadful misunderstanding, the unmasking of a rapist (and assorted other folks), and there may even be a happy ending.
I enjoyed reading this one.  The characters were very well-developed, at times actually making me cringe because they reminded me of people I know, the plot moved quickly, and the suspense was high.  I would certainly recommend reading this one.  I also plan to check out some of Maggie Dove’s other work as well.
Laura's Rating: