Author submission in exchange for an honest review.
Title:
Blessed 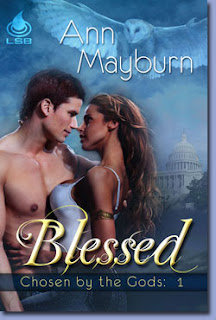 Description:
Eliana Shay is an ordinary college girl with an extraordinary birthright. Handsome professor, Aiden Klemenson, singles her out as a potential Chosen of the benevolent gods of Creation. He tries to convince Eliana that she is born to do the work of the gods, but her upbringing hasn’t given her much trust in religion or having a magical destiny. The daughter of atheists, she has been raised to believe that faith in gods is for the foolish and weak.

Aiden must employ all of his considerable charm to break through her defenses, while trying to keep their relationship strictly platonic. A difficult task when the lush and curvy co-ed's obvious desire and seductive aura shreds his self-control. Despite his best efforts, desire burns between them with an enchantment all its own.

The gods of Destruction will stop at nothing to keep Eliana from becoming a powerful force against evil. Cunning and deceitful, they send demons and magical serial killers to exterminate her before she can become a Creation god's Chosen hand on earth. In order to survive, Eliana will have to learn to have faith in her own strength and Aiden's love.


Joey’s Review:
I love this world Ann Mayburn has created. It’s American freedom of religion on steroids. Business is good for the gods, considering in this alternate reality, it’s hip to be a priestess. Temples and temple districts abound. Religion collides with religion collides with religion. Name any god or goddess from your mythology textbooks, and in this world, you can find one of their disciples within spitting distance.


The fun twist is that our heroine, Eliana, is the daughter of strict atheists who have no tolerance for the mystical, magical world of which they live on the fringes.  Eliana is exposed to the ways of the worshipful world because she’s a scholarship student attending school in D.C., quite the hub of god-worshiping activity.

Our dear heroine is very inexperienced in the ways of magic and mysticism. Which is a bit of a problem, considering she is marked as a potential Chosen  of the good forces of Creation; someone who will become the hand of a god on Earth, if one of the gods decide she’s worthy. And if the dark forces of the gods of Destruction don’t get their hands on her first.


This is one of those stories that, for me, clarifies that giant step between a four star read and a five star read. Often, I have my hands on a story that’s great. I deeply enjoy everything about it. But I hedge about going up one level to a five star rating. Then I feel guilty about not doing so because the story was really good.


But then something like Blessed comes along and clarifies it all for me. As I’ve said a million times now, I’ve never been a big reader of fantasies or paranormal stories. They often leave me desiring something more. I don’t know why. I’m sure it’s just the way my brain works.


This right here could be the story that converts me once and for all; because I was hooked like a fish, ladies and gents. Couldn’t get enough of Eliana and *swoon* Aiden. And the rest of the characters. And the awesome storyline. I adored everything and everyone instantly.  I considered calling off from work so I could stay home and read. I ignored important writing schedules to keep reading. I was like a crack addict looking for the next fix. And I was irritated when the story ended. Not over anything in the story. Just because it was over.


Thank the gods that I found out this is a series. Now I just have to wait impatiently for the next book. Go. Read this book. NOW. I command you.