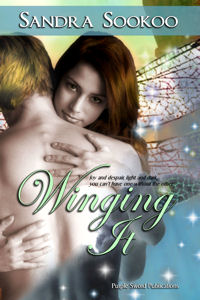 Description:
Joy and despair, light and dark, you can’t have one without the other.
Devlin Addams has recently returned home from Afghanistan.  Haunted by memories that he survived the fighting while his buddies didn't, as well as chased by the knowledge his mom is crazy, he’s having trouble acclimating himself to civilian life. Now, armed with a dog and a therapist, he constantly battles the urge to end it all.
Lia Farry—because her Fae name is a mouthful—has tumbled into the Mortal Realm through the Veil between worlds by mysterious circumstances.  Thrust into a new and harsh human existence, finding anything to be happy about is hard. If she can’t go home, she’ll have to make it work.
Forced to interact, Dev’s protective instincts kick in, but he’s unprepared for the onslaught of lust Lia represents.  He wants a normal life but not at the expense of getting involved.  Lia knows she soothes his torment yet she’s battling her own problems. Desiring Dev is a dangerous prospect.  Add in a meddling Fae queen and suddenly life as they know it will change forever.  Love is at stake.  A leap of faith is all they have to depend on.
Joey’s Review:
I can't help but give this story a five-star rating. For one, I can seldom invest in a story about fairies. I suspect it's my realist mentality that keeps me from getting swept up in stories with such fantastical elements. It's annoying, frankly.
At any rate, I started reading and found myself utterly delighted by this story. Dev is a vet home from the war and suffering greatly from the horrifying deeds he had to commit on behalf of his country. In therapy and struggling just to get through each day, he encounters Lia and immediately feels drawn to her.
Despite her outlandish claim of being one of the fae, Dev can't help but offer her shelter. And eventually, his protective instincts are put to the test.
What truly drew me into the story was the stark contrast between Dev and Lia. Dev is hardened, with a troubled heart and mind. Lia is flighty, out of touch, and positivity personified. Initially, Dev finds her ditzy and woefully dim, but as his heart opens to Lia, he realizes that she's not quite as vapid as he thought she was. Lia, on the other hand, has layers that are slowly revealed. And Dev, though he seems lost, carries on because buried deep inside is a man who really wants to reconnect with the beauty of the world.
The mixture of the harsh realities of life and the potential to find magic all around is what makes this story a winner. Loved it!
Joey's Rating: