Review: Beyond A Highland Whisper 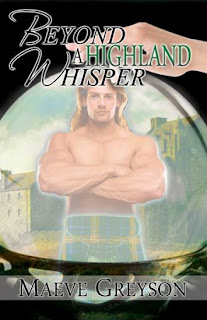 Description:
Can love prevail over the dark magic of a woman scorned?

The last time Latharn MacKay walked among his kinsman was in Scotland of 1410. Sensuous and charismatic, all the women wanted him, but none could capture his heart. Latharn's charm became his curse when a dark sorceress didn’t take rejection well. She snared his soul into a crystal globe until the one woman destined to be his love whispered his release. Now all Latharn has to do is find her and guide her to him without speaking a word.

One of the youngest archeologists in St Louis of 2010, Nessa credits one thing for this achievement: the recurring dream of a heart-stopping Highlander since the summer she turned eighteen years old. Little does she know, he's not some fantasy cooked up by her subconscious. He’s a trapped soul determined for Nessa to end his six centuries in hell.
Laura’s Review:
What do you get when you cross a 600 year old curse, a furious Highlander, a stubborn archaeologist, and a vengeful demon?  Beyond a Highland Whisper.  Yes, this story has all of the elements listed, plus a few sparkling supporting characters.
Nessa is a rather reserved archaeologist with a passion for the history of the Scottish highlands, and a recurring dream in which she is seduced by an old-school Highlander.  Like straight out of 1410.  What she doesn’t realize, is that her dream Highlander (Latharn) actual is from 1410, and he’s been trapped in a small ball (think the balls of prophecy in the department of mysteries in Harry Potter) since then because he was cursed by the aforementioned vengeful demon.  The curse can only be broken by Latharn’s one true love.  You can see where this is going, right?  Nessa and her utterly fabulous and feisty friend Trish end up in the Scottish Highlands on an archaeological dig, where they accidentally run into a couple of Latharn’s descendants.  Who also happen to be the ones caring for and guarding the ball where Latharn is imprisoned.  Somehow, they have to convince Nessa to break the curse, but can’t give her any information – otherwise Latharn will be doomed for eternity.
In addition to all of this, Nessa is being “romantically” pursued by the overly aggressive and rather creepy Gabriel.  What Nessa doesn’t know is that Gabriel is actually being possessed by the demon who initially put the curse on Latharn.  And even after 600 years, she still wants revenge.  And that means that even if Nessa manages to break the curse, neither she nor Latharn will be safe until the demon is destroyed.
There was a little too much fantasy and magic in this story for me.  I tend to like my reads more firmly planted in the ground, so I was a little iffy about this one, especially because both Nessa and Latharn drove me crazy.  They were both irritating and domineering and stubborn, and when they were in the same scene it was almost repulsive how combative they were.  What saved this story for me were the supporting characters.  Trish and Latharn’s cousin Fiona were utterly fabulous, and the only two people in the story who seemed to have a rational thought in their heads.  This story didn’t really do too much for me, but I imagine that if you were a fan of paranormal romance you’d enjoy most of the elements here.
Laura's Rating: