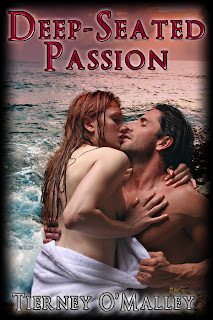 Description:
Aaron Hawke is a successful engineer, an overachiever, fiercely independent and cautious man. After eight years of being away, he comes home only to learn that his ex-fiancée who stabs his heart and left love’s bitter taste in his mouth is living and working in his grandfather’s mansion. Aaron quickly decided that she must leave. However, his grandfather’s will has made things complicated—Bronwyn can only leave when she has paid her debt.
Bronwyn Flaherty, a down-to-earth, honest, faithful chatelaine and utterly broke, is miserable. Aaron wants her to pay her debt or start packing. With her hands tied behind her back, she comes up with a solution—sex. Bronwyn’s bold offer shocks Aaron, but he accepts it. He will use her whenever he gets a chance. Payback time. But two weeks into their agreed one month contract, he’s become entangled in his own seductive game.
Brandi’s Review:
I'm not sure where to start with this.  I was kind of iffy when I read the description for this book.  But once I actually got into the story, the premise made a lot more sense.

I liked Bronwyn, but for once the hero here, Aaron left me wanting.  I felt he didn't really have any redeeming qualities. Anything that he did after his return home was in direct effect of Bronwyn. Sure he had feelings, he wasn't a total douche but he was more pig headed then anything.

There were a few editing mistakes, but my biggest issue with this story was that Aaron specifically felt very stiff when it came to dialogue and inner monologue. I understand he was kind of a mix between high class money versus grease monkey,( because lets face it, if he's a engineer for Ducati he had to start somewhere by getting his hands dirty), but it just felt forced sometimes.
Brandi's Rating: