We're happy to take a moment to welcome Ashlynne Laynne to The One Hundred Romances Project as she shares the details on her paranormal romance, The Progeny. Read on for blurb, excerpt and details on where you can find Ms. Laynne online, and how you can get your hands on a copy of The Progeny. Thanks for stopping by, Ashlynne!

The Progeny
By Ashlynne Laynne 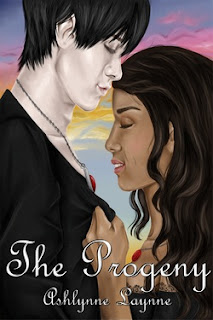 “No fate other than the one I choose.” The timeless creed, and tattoo, bore by the Rousseau’s— a vampire clan with the purest bloodline of any vampire family. Out of this clandestine group came one who was different, yet the same: Ascher - a half-bloodling— half- human, half vampire. Ascher questions the purpose for his existence and which world he truly belongs to: the human world or the vampire world. Two months from sealing to Ursula— a prearranged union to a woman he abhors — he’s at his wit’s end. He knows if he calls off the sealing, the Romanian clan will strike with deadly force, but he cannot see eternity with a cold empty shell of a woman like Ursula. Just when he thought life was complicated enough, he meets Shauna— a beautiful, bi-racial human Wiccan — and immediately develops an unshakable attraction to her. She makes him feel alive and vital despite his origins and Ascher makes a decision that turns his immortal world upside down.

Ashlynne Laynne has always had a soft spot in her heart for vampires but grew tired of the garlic fearing, sun loathing creatures of old. An avid horror movie fan, she tends to enjoy media and music that is of a younger, more eclectic nature. This was the catalyst for her writing The Progeny. The vampire/witch pairing is unique and different when most books pair vampires with werewolves.
The infinite possibilities, for such a wickedly unique couple, intrigued her. There is no shortage of romance, steam and surprises in The Progeny. These books are for adults and contain adult sensuality and themes, but minimal profanity. She loves writing on the edge and teetering between the erotica and romance genres. She thinks of Ascher and Shauna as the damned version of Romeo and Juliet.
She’s currently working on book two of the series entitled Blood Bonds. In her spare time, Ashlynne enjoys cooking, reading and spending time with her family. Ashlynne juggles the hats of wife, mother, full time employee and part-time writer, hoping to write full time one day soon.
Ashlynne lives in North Carolina with her husband and teenage son.
Ashlynne appreciates and loves to hear from her readers. You can connect with her at the following places:
Twitter: @qlane

Email ThisBlogThis!Share to TwitterShare to FacebookShare to Pinterest
Labels: The Progeny Blog Tour