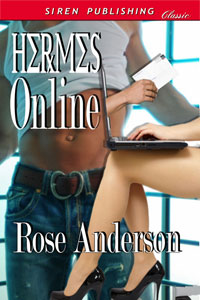 Description:
Imagine meeting someone who thoroughly compliments you. You share likes and dislikes, views and outlooks and a soul connection unlike anything you've ever experienced before. It takes your breath, quickens your pulse and consumes your every thought. When you make love for the first time, it's as if every cell in your body confirms this is your twin flame. Now imagine the timing is horribly off. In my first novel, Hermes Online, Vivienne joyfully discovers such a love amid the ancient ruins of Greece - a love so complete and soul satisfying but one that just isn't meant to be.

As surely as seasons change, life moves on. Grieving the love she found and lost beside the impossible blue waters of the Mediterranean, Vivienne eventually takes another chance at happiness but unfortunately her next relationship turns out to be one of betrayal. Her faithless boyfriend intentionally administers a low blow to deflect the attention off of him and on to her - if she weren't so dull in bed he wouldn't have had to look elsewhere. Not being one to deliberately hurt someone herself, his unaccountable words become a yoke of self-doubt that spills over into every aspect of Vivienne's life. Hungering for a good word, on a whim she enters a short story written during happier times, to an adult literature site and makes a connection with a compelling man known only as S. The two soon embark upon the world of anonymous Internet communication where their suggestive emails lead her to try erotic chat, where cybersex leads to Skype, and C2C sends both into the arms of a love they'd believed lost forever.
Brandi’s Review:
This was a fun, sexy book about an online love connection.  I love this concept.  Coming from someone who became part of the AOL world right after it was the "hottest" thing, I remember the chat rooms, and meeting people online and how foreign yet thrilling it all was.  I, however, was a teenager and was not participating in the same varieties of activities the couple in this book were, but I did share that little flutter in my stomach whenever I heard that magic three little words from the man in the box.  So needless to say, I love this concept.


But then you come across another concept in this book, star crossed lovers.  Which again, I love.  However, there were parts of this story I felt were completely unrealistic.  And I am not talking about "unrealistic" as in there are a group of drop dead gorgeous brothers who are all sweet, romantic, hung like horses and are sex gods unrealistic.  I'm talking about if this is someone you've known, someone you've been intimate with, that you'd not know then again in the same situation?  I call shenanigans.  Maybe if it were 20 years, but not six.   I think this book could have been amazing with just a little fine tuning and the ending different.   It's still a fun read, and this author shows promise.  She's definitely someone to watch!
Brandi's Rating: