Review: One Night with You

Author submission in exchange for an honest review.
Title:
One Night with You
Author:
Vanessa Devereaux
Release Date:
June 2011 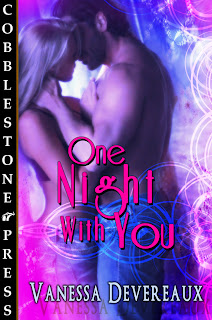 Description:
Both nursing broken hearts, Dana and Mike meet at a New Year's Eve Party. When the clock strikes midnight, a tipsy Dana tells Mike her New Year's wish and that's to get pregnant.

Mike, after being shot in the line of duty and being dumped by his wife, realizes he wants to be a father. When the two decide to have a baby without any strings attached, things get complicated and after they both realizing they're falling in love, there's no turning back.
Joey’s Review:
Dana and Mike meet at a New Year’s party, and are pushed together by Dana’s sister. A little bit of alcohol and a kiss at midnight lead to Dana confessing her greatest desire to Mike: She wants to have a baby.
The only problem is that Dana is very single, after a crappy year that included being left at the altar by her then fiancé.
Instead of sending Mike running for the hills, her confession gets the man thinking. He wants a child, but he’s licking his own end-of-romance wounds, and isn’t willing to get involved again. Eventually, Mike contacts Dana and proposes that they make a baby together, without the complications of dating or marriage.
Naturally, the road to Babyville isn’t as easy as they thought it would be.
Ah, it was so nice to really sit down and read again. I feel like I haven’t had enough opportunity lately, and One Night with You helped get me back into the groove. I enjoyed the story, the chemistry between Dana and Mike was immediate, and it worked well.
Mike has a demon or two to fight, which gives him an edge, and both characters carry baggage we can sympathize with. It’s nice to read about people with damage that isn’t over the top. This was about two people struggling with the fear of being hurt again. Who can’t relate to that?
A very sweet story paired with some spicy bedroom scenes. Give it a read!
Joey's Rating: