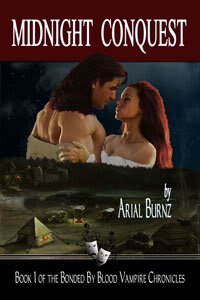 Masked in a Gypsy guise, Broderick MacDougal hides his vampiric identity while seeking to destroy the man who slaughtered his family. When an old Clan rival ensnares Broderick in a trap using an enticing widow, he is compelled to discover if she is bait or an accomplice, and the cinnamon-haired beauty is his next conquest.

Widow of an abusive husband, Davina Stewart-Russell clings to the only image that gave her strength during those dark times—the Gypsy rogue who stole her heart as a youth. After nine years, she is finally face-to-face with him again, but reality clashes with fantasy as she is confronted with Broderick’s passionate pursuit.

When Davina’s past returns to haunt her, Broderick is forced to reveal a dark secret worse than anything Davina thought possible. The challenge before them has fatal risks and neither of them is prepared for the sacrifices expected for the sake of eternal love.

Brandi’s Review:
Have you ever read a book and thought, if this person doesn't get a happy ever after I'm going to throw this book across the room and never read this author again? Yeah, me too.  And that's how I felt during this book.  The author really made you feel so much compassion that I thought to myself, where is the line between character building and too much drama?  But I came to the realization that such character building makes the happily ever after that much sweeter.  It also explains the connection between Davina and Broderick.  Davina had her very own romantic hero when she met Broderick and she kept that vision to see her through very dark times.  I did find her behavior odd when they met again, I mean who wouldn't want a sexy, flirty, gorgeous gypsy vampire?  Where can I sign up for one? I also thought the story arc that will cross through the series is a fun twist.  On a side note, even though the author gives a disclaimer in regards to the accuracy of the language for the time period, it was a little odd to read current slang terms.  Overall great read and I am excited for the next in the series.