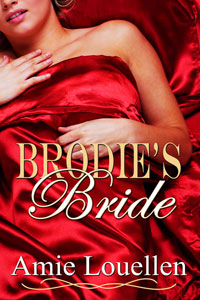 Description:
Waking up next to a beautiful golden-haired stranger isn’t the worst thing that has ever happened to Brodie Harper, but staying in a fake marriage in order to gain a new construction contract could very well be.
Savanna Morgan just wanted a way out of an engagement to a man she didn’t love. Marrying Brodie seemed liked the perfect answer at the time. Less perfect the next morning when she finds herself disowned by her father and flat broke.  Now she must make it through the weekend. Monday they can get it all annulled and forget it ever happened.
The real problem may be keeping their hands off each other until then.

Ever hear that saying that goes something like, “there are no new stories, just new ways to tell the old ones”? That’s what popped into my mind when reading Brodie’s Bride.


The story isn’t new. Two tipsy people meet in a seedy bar in Las Vegas. One thing leads to another, and they wake up in the morning with pounding headaches and matching wedding rings. Hijinks ensue as the couple realize they must stay married for a certain amount of time. And the question is, will they part ways as planned, or find a way to stay together?


Brodie, the groom. A bit gruff, a bit insensitive to his stranger of a bride. But he’s got a soft side. A very sexy, enjoyable soft side that isn’t overwritten.


Then we have Savanna, the bride. Spoiled brat. Rich girl suddenly finding herself on her own after her powerful Daddy tells her to clean up her own messes for the first time in her life. But there’s a huge but here.


This is the part where I usually start rolling my eyes and losing my interest in the story. Oy vey with the rich bratty brats, copping an attitude yet still winning the boy. Right? Wrong.


Savanna is rich. And she’s spoiled, ‘tis true. But she also has a soft side. A soft side that doesn’t really let her get around to being the rich bratty brat.


Savanna is a fantastic character, in my estimation. She’s very human. She’s not used to Daddy not helping her out of a jam, but there are no epic hissy fits. There is no Paris Hilton Syndrome. Savanna is more lost and out of her element than she is suffering from pampering withdrawal.


Instead of following stereotype, the author bothered to create a person we care about, despite her privilege. This character actually confronts the challenges of ‘normal life’, albeit with a bit of hesitancy. As Brodie slowly draws her into his average world, Savanna, instead of violently fighting it each step of the way, finds herself fitting rather well into average.


Let’s not stray too far from Brodie. Brodie has reasons for his standoffishness. He’s been hurt a time or two in his life and isn’t so willing to let someone new in. He has enough room in his heart for his close friends and his Nan, but refuses to open up to more.


Too bad he crossed paths with the not-easy-to-forget  Savanna. His rigid rules on love take a major hit once this lady starts to worm her way into his heart.


These two are doomed to fall in love. And I kinda fell in love with the two of them, as well. Not so hard to do when an author gives us a couple we can so easily root for.