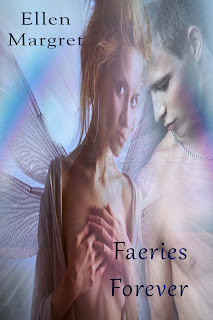 Description:
Owletta        A male human and a female faery, swapped at birth. Hawke and Owletta were destined to be united. Their love would save a dying land.  Alconia        It wasn't love at first sight. Princess Alconia despised Richard, but in faery land, anything can happen. Love blossoms with a bit of faery dust.  Cyana        With the faery realm facing annihilation, Eben had to act, especially since Cyana, the faery whose heart he broke, was now mother to his son.  Feemotha        Can a banished faery witch and a human doctor find love? As they strive to protect the faerwitch’s daughter, Chris and Feemotha do just that.   Flavia        Implicated in the disappearance of King Emporo, Flavia is abducted by Malsatpyri. It doesn’t take the male faery long to realise Flavia has his heart.
Deniz's Review:


Ellen Margret's Fairies Forever is an anthology of five interconnected short stories that comprise her two previous publications on faeries, A Faery Gathering and Forgotten Faeries, plus one new story. Not your average fairy tales, these stories contain many elements of traditional tales with exciting – and sometimes hilarious – new twists. The first story starts out sweetly enough, with a pair of babies switched at birth. Only one of them happens to be a faery child... Each story escalates in tension level, adding new characters and deeper backgrounds to Margret’s faery realm.
Weaknesses lie in a few textual inconsistencies (Cyana’s full name is alternately spelled Cyanarisia and Cyanarisa; Eben is called Ethan at one point; the third paragraph of the first story states that places of incarceration don’t exist in the faeries’ world, yet a dungeon comes in handy in each adventure) and seemingly incongruous profanities; I couldn’t help but wonder, why call it a shaft (and not a dick, for instance) if the next line is going to include a phrase like “to fuck a faery”. The erotic scenes were quick, with no real romantic build up, and rather clinical for my taste (“he was treated to the most exquisite view, once again, of her female labia”), but this style may be right up other readers alleys.
A number of scenes had me laughing out loud. Who would have thought of nicknaming a strong and wise faery Mighty Mal? And the comeuppance of the bad faeries Festo and Marbo, involving a recurring rat, was amusing to anticipate as each new tale began.
Margret is strong on character growth. I especially enjoyed meeting new characters in one short story who came off as completely antagonistic, and then grew and changed in the subsequent story, so that by the end of the last tale, I was rooting for an entire band of faeries and mortals. I’d love to see a glimpse of their next adventure!
Deniz's Rating: