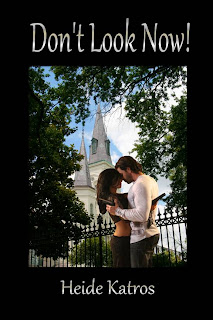 Description:
Les Harper faces some tough choices about his future with a prestigious law firm and the unexpected inheritance of his father’s estate. Hoping to clear his mind, he decides on a short trip to New Orleans. Instead of the anticipated R&R he ends up in a police holding cell, a suspect in a street murder.
Careena Torres, a tough New Orleans cop is the arresting officer. She turns a deaf ear to his claim about his innocence. However, when his claims are confirmed the next day she looks him up to apologize. She is not prepared for the instant attraction she feels for Les. For years she has hidden a dark past behind her police badge. She is not ready for any relationship, though she doesn’t realize that it’s already too late for that. But since the murder was gang related, sanctioned by a handful of dirty cops, who believe that Careena and Les know more than they admit both their lives are on the line.
Laura's Review:
Don’t Look Now doesn’t fall squarely into one genre.  If you’re looking for a romantic – suspenseful –mystery hybrid, this may just be the book for you.  It was certainly the book for me.  It had all of the things I love in a book – strong, relatable characters, a fast-moving plot, suspense, and romance.
Les is a regular alpha male.  He’s a bit of a man slut, is afraid of commitment, successful, and devoted to his mother.  Wait, what?  Yeah….he loves his mama.  But since mama is a strong female who knows how encourage and advise her son without being overbearing, it’s not surprising that Les is so devoted.  Les also has some Daddy issues.  These are really only mentioned in passing, but the reader is able to infer that daddy is clearly the cause of Les’s commitment-phobia.  At any rate, when daddy dies, Les inherits the family business, although he wants nothing to do with it.  In an effort to get his head together (and to avoid his father’s latest mistress at the funeral), Les hightails it to New Orleans.
Enter Careena.  She’s a tough girl cop, inordinately stubborn, and a bit arrogant.  In short, she’s the female version of Les, only with ex-husband issues instead of daddy issues.  Careena is most definitely not in the market for a relationship, let alone sex with a stranger.  At least until she runs into Les.  And by “runs into,” I totally mean “arrests.”  Les, for his part, just happens to be in the wrong place at the wrong time.   That doesn’t stop him from being furious that Careena has arrested him.
The next day, Careena realizes that she might have been a little high-handed, so she goes to apologize to Les.  When she shows up at his door, Les falls straight into lust.  The two end up making plans to explore the city and to have dinner together.  Things go well, Careena starts to fall for Les (though she, of course, treats him like dirt and won’t admit her feelings), and Les has no idea what his feelings actually are (stupid man).  There’s only one problem: someone is out to kill Careena.
When she arrested Les, Careena inadvertently walked into the middle of a drug war.  The bad guys want to shut her up, so they make a few attempts on her life.  She’s put on paid leave from the police force, but, being the hard-headed moron that she is, Careena insists on continuing to put herself (and by extension, Les) into harm’s way.  After one too many brushes with death, Les finally calls Careena out on it.  Instead of reacting rationally, she basically tells Les to go to hell – he was only there for sex in the first place so what difference did her life make to him.  Les leaves furious.  Whether he’s angrier at himself or Careena is not quite clear.
Careena, meanwhile thinks that all of the attempts on her life are over, so it’s business as usual for her.  Until she’s kidnapped.  Back in Florida, Les is moping around over Careena.  Finally his law firm puts him in charge of a client in New Orleans.  Do you think Les makes it in time to tell Careena his true feelings?
The only thing I really didn’t like about this book was how unconcerned for Careena was for anyone, including herself.  She kept intentionally putting herself in danger, almost like a plea for attention, but then when she got the attention she would become frustrated and recoil from everyone around her.  Her behavior got real old, real quick.  Not that Les was perfect.  If he were a real human being, I would feel the need to bring him down a peg, but still.  He at least wasn’t putting his life in danger.  Overall though, I really did like this book.  It was a fast-paced, easy read.  I’d definitely recommend it.
Laura's Rating: